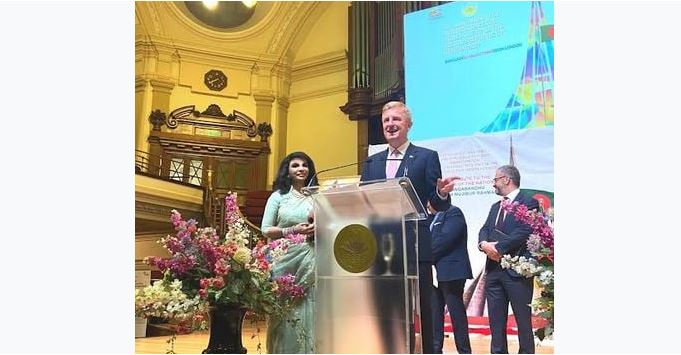 They paid the homage and lauded the Premier at a reception hosted by Bangladesh High Commissioner to the UK Saida Muna Tasneem on Monday at the Great Hall of London’s prestigious venue Methodist Church Convention Centre at Westminster, next to the British Parliament, marking Bangladesh’s 51st anniversary of Independence and National Day, said a handout received, BSS reports.

Chairman of the Conservative Party and Cabinet Minister without portfolio Rt Hon Oliver Dowden, MP, attended the reception as the chief guest while British Foreign and Development Office (FCDO) Minister for South and Central Asia, North Africa, United Nations and the Commonwealth Lord Tariq Ahmad was the guest of honour.

UK Minister for Defence Jeremy Quin, MP, and Minister for London and Small Business, Consumers and Labour Markets Paul Scully, MP, attended and spoke on the occasion as special guests.

A number of cross-party MPs along with Commonwealth Secretary-General Rt Hon Patricia Scotland, International Maritime Organisation Secretary-General Kitack Lim, high commissioners and ambassadors of over 50 countries including, High Commissioner of India to the UK Gaitri Issar Kumar; and business association leaders, academics and eminent members of the British-Bangladeshi diaspora attended the reception.

Recalling Bangabandhu’s maiden visit to London on January 8, 1972 as President of Bangladesh and meeting with Conservative Prime Minister Sir Edward Heath, Oliver Dowden, MP, said, “That was not only a historic meeting at No 10 a powerful symbol of Bangladesh’s independence, but it laid the foundation for a deep and enduring partnership between the UK and Bangladesh. Over time, we’ve established a strong bond with Bangladesh, bound by kinship, cultural ties, and shared values.”

Biden eyes boost to mining of minerals for electric vehicles