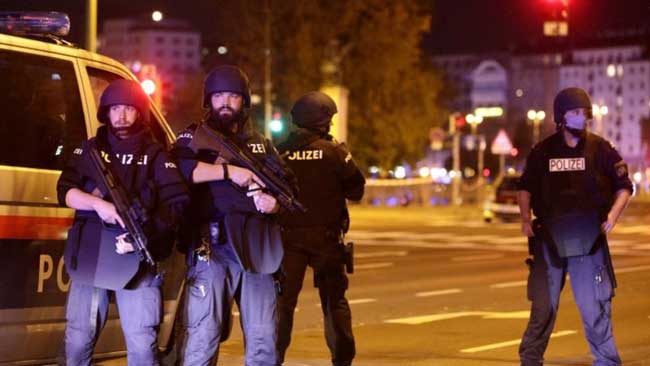 Police were searching for at least one attacker who was still at large, the interior minister said.

The shootings took place near Vienna’s central synagogue but it is not yet clear if that was the target, reports BBC.

One of the victims was killed at the scene of the shootings while a second – a woman – died later in hospital from her wounds, Mayor Michael Ludwig said. It is believed 14 other people remain in hospital, six in a serious condition.

A police officer is among the injured, the interior ministry said.

The attack happened just hours before Austria imposed new national restrictions to try to stem rising cases of coronavirus. Many people were out enjoying bars and restaurants which are now closed until the end of November.

What do we know about the attack?

Police said the incident began at about 20:00 (19:00 GMT) on Monday, near the Seitenstettengasse synagogue, when a heavily armed man opened fire on people outside cafes and restaurants.

Members of the special forces quickly arrived at the scene. One policeman suffered a gunshot wound before other officers shot the perpetrator, who was armed with an automatic rifle, a pistol and a machete.

Jewish community leader Oskar Deutsch tweeted that the synagogue was closed at the time the attack began.

An officer guarding the synagogue was among the wounded, newspaper Kronen Zeitung reported.

Trump shifts between combativeness and grievance