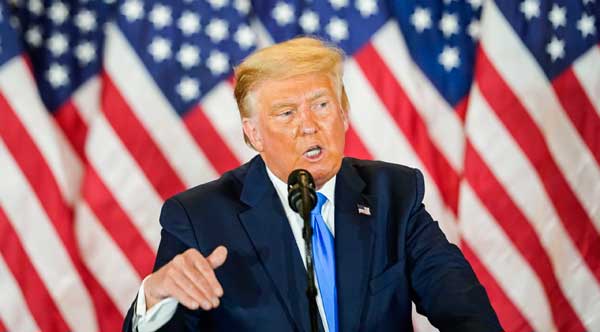 With votes still being counted across the nation, President Donald Trump on Thursday sought to undermine confidence in the nation’s election, making unsupported accusations from the White House about the integrity of the results in his race against Democrat Joe Biden.

Hours earlier, Biden offered reassurances that the counting could be trusted, projecting a more presidential appearance while urging patience from Americans.

The candidates’ sharply contrasting postures intensified a national moment of uncertainty as the nation and the world waited to learn which man would collect the 270 electoral votes needed to capture the presidency. Trump pursued legal options with little success, working the phones and escalating efforts to sow doubt about the outcome of the race.

His path to victory narrow, Trump pushed unsupported allegations of electoral misconduct in a series of tweets and insisted the ongoing vote count of ballots submitted before and on Election Day must cease. And in his first public appearance since late on Election Night, he amplified the conspiracy theories amid the trappings of presidential power.

He made similar claims about election integrity during the 2016 campaign, which he went on to win. This time, he was speaking not as a candidate, but as the sitting president of the United States.

Biden took a different tack, speaking briefly to reporters after attending a COVID-19 briefing to declare that “each ballot must be counted.”

“I ask everyone to stay calm. The process is working,” said Biden. “It is the will of the voters. No one, not anyone else who chooses the president of the United States of America.”