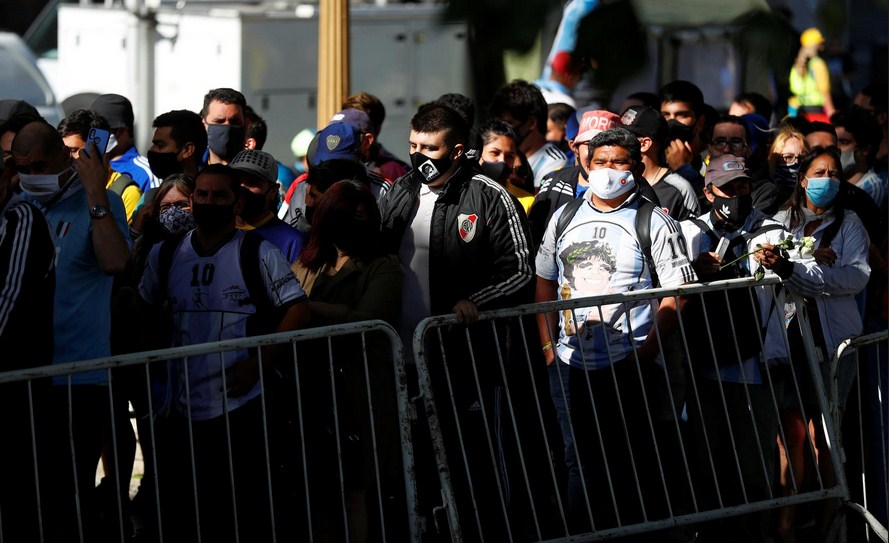 Thousands of fans are paying their final respects to Argentine football legend Diego Maradona at the presidential palace in Buenos Aires.

Three days of national mourning have begun in Argentina after Maradona, a national hero, died following a heart attack on Wednesday at the age of 60.

Some wept, others blew kisses and said prayers as they filed past the coffin being displayed at Casa Rosada.

A million people are expected to visit his casket.

Officials had rushed to install cordons and other measures to try to limit the spread of coronavirus, as big crowds gathered on the capital’s Plaza de Mayo on Wednesday night, BBC reports.

Late into the night, a sea of people in Argentina shirts thronged the streets across the country to mourn Maradona’s death, and celebrate his life.

Maradona, one of the greatest football players of all time who played for clubs including Barcelona and Napoli, was captain when Argentina won the 1986 World Cup, scoring the famous “Hand of God” goal against England in the quarter-finals.

Former Tottenham midfielder Ossie Ardiles, who played alongside Maradona at the 1982 World Cup, said he was “a god” in Argentina, in Naples and all around the world.

The former Argentina attacking midfielder and manager died at his home in Tigre, near Buenos Aires.

He had successful surgery on a brain blood clot earlier in November and was to be treated for alcohol dependency.