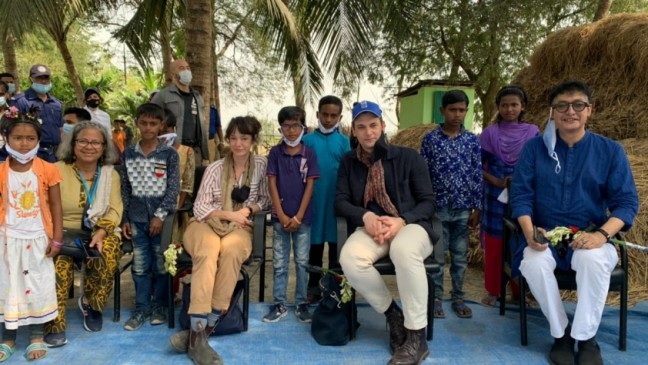 The Swedish Minister of International Development Cooperatives, Per Olsson-Fridh, has expressed satisfaction over the use of his country’s climate change adaptation support in Bangladesh.

“We are delighted to see that women in such remote place are benefitting from drinking water from a plant set up with Swedish support,” he said.

“This is a good example of climate change adaption support being used effectively,” he said after visiting a water purification plant set up by the Local Government Initiative on Climate Change (LoGIC) project in Sutarkhali in Khulna’s Dacope.

“Climate-adaptive livelihoods are reducing climate migration which will have long term positive impacts on the country,” he added after talking to the beneficiaries of the GCA project in Tildanga of Khulna’s Dacope.

“Empowering one woman is empowering a family and a society, I am happy that Sweden is supporting SWAPNO to empower rural women in Bangladesh,” the Swedish minister said after seeing the project activities in Shatkhira’s Tiger Point.

Bangladesh, ranked 7th among 10 countries most vulnerable to climate change and disasters, have been experiencing extreme weather events like cyclones, floods, droughts and rise in salinity of water, which particularly affect the poor and vulnerable, especially women.