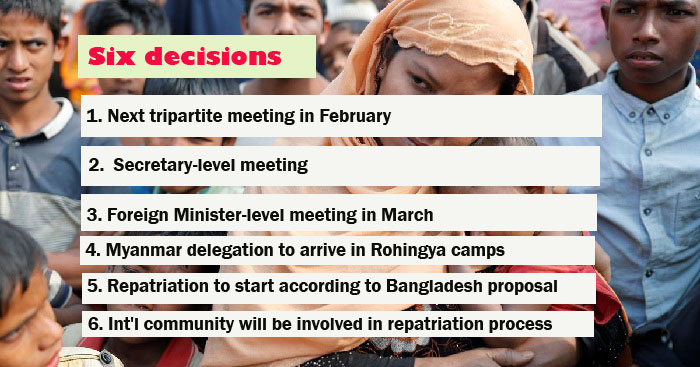 Following the meeting, Foreign Secretary Masud Bin Momen told a press briefing that six decisions were taken at the meeting.

Expressing cautious hope, he said the Rohingya repatriation will begin at the second half of this year.

The six decisions taken at the meeting are: i) Bangladesh-Myanmar-China Working Group will hold a meeting in February next; ii) Following the working group’s meeting, the Secretary-level meeting among these three countries will be held; iii) The Foreign Minister-level meeting of Bangladesh-Myanmar-China will be held in March; iv) Following these meetings, a delegation from Myanmar will visit Bangladesh who will be taken to Rohingya camps; v) The Rohingya repatriation process will start according to a proposal of Bangladesh though Myanmar said they have identified 42,000 Rohingyas and repatriation process will be started with them; and vi) International community, especially the neighbouring countries will be actively involved in the repatriation process.

The repatriation talks with Myanmar remained halted for nearly a year due to Covid-19 pandemic and general elections in Myanmar.

US committed to work with Bangladesh to end trafficking-in-persons: Miller