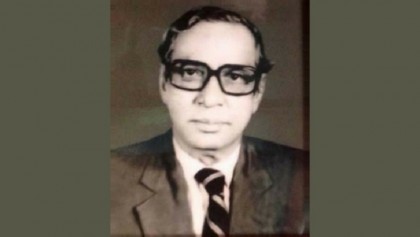 Khandaker Moshtaq Ahmed, the key-political patron of August 15, 1975 coup plotters who installed him as the President soon after the carnage, carried on visibly unchallenged for a period of two months, when someone emerged to confront him, face to face.
History suggests the man was Serajul Huq – a senior lawmaker of that time and childhood friend of Father of the Nation Bangabandhu Sheikh Mujibur Rahman. Being a famed criminal lawyer he eventually appeared as the chief prosecutor of his murder trial as well.
“The protest was very straight and loud – eyeball to eyeball,” said Ali Ashraf, who witnessed the protest at a meeting at Bangabhaban as a lawmaker from a Cumilla constituency as he was talking to BSS coinciding with Huq’s 18th death anniversary.
Ashraf, an MP in current parliament as well, recalled that the challenge which Huq had thrown, made Moshtaq furious while the killers in military uniform made visible their strong presence around, wielding their guns, scarring everyone at the scene.
He, however, could not specify the exact date but assumed it was a day in the middle of October when Huq had his heated confrontation with Moshtaq drawing an abrupt end to the meeting at the presidential palace, Bangabhaban.
Huq’s son and current law minister Anisul Huq said Moshtaq, as a matter of fact, had called two meetings in October, the first one in mid October and the second in the later part of the same month.
According to junior Huq lawmakers from all over the country were called to the first meeting, while the second one was exclusively with MPs from Cumilla, which was Moshtaq’s own home district.
33
Share