John Abraham’s upcoming film, Satyameva Jayate 2, has a new release date. The mass action entertainer will now release on May 12 i.e. Eid 2021. The makers made the big announcement by releasing a new poster for the film, which features John in his moustached avatar, holding a plough and tricolour blood dripping out of his chiselled body. The look is possibly a tribute to the farmers of India who work day and night to feed the countrymen.

“Jis desh ki maiyya Ganga hai, wahan khoon bhi Tiranga hai!,” reads the punchline on the poster, which translates as, “Even blood is of tricolor in a country where River Ganges is worshipped as mother.”

Below, take a look at the poster: 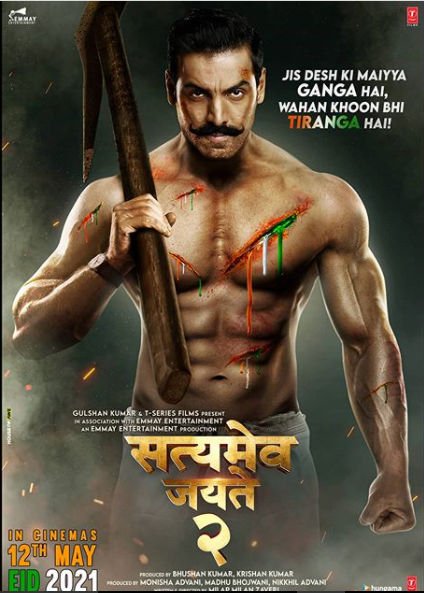 Satyameva Jayate 2, directed by Milap Milan Zaveri – who also helmed the film’s 2018 sequel, Satyameva Jayate – was earlier slated to hit the screens on October 2 this year, when it would have clashed with the Ranveer Singh-starrer Jayeshbhai Jordaar and the Farhan Akhtar-starrer Toofan. However, owing to the coronavirus pandemic, the film, it was certain, would be postponed.

Satyameva Jayate 2 stars Divya Khosla Kumar opposite John, who will be returning to the silver screen after a long hiatus. She last appeared in the 2004 film Ab Tumhare Hawale Watan Saathiyo. For those not in the know, Divya is the wife of film’s co-producer, Bhushan Kumar of T-Series.

Besides this project, John will also be seen in films Attack and Mumbai Saga. The actor is also making headlines for reportedly being the antagonist opposite Shah Rukh Khan in Siddharth Anand’s Pathan. The film stars Deepika Padukone as the female lead, who last shared screen space with John in Race 2 (2013).

Free Medical Camp for pregnant mothers and children was held in Moulvibazar.