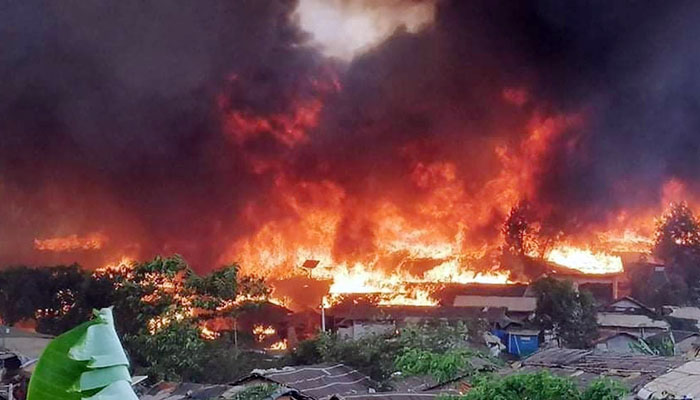 The death toll from the Monday’s massive fire at Balukhali Rohingya camp in Ukhiya upazila of Cox’s Bazar rose to 11 with the recovery of four more bodies.

Seven bodies including of two women and two children were recovered from the debris earlier.

The blaze broke out around 4.00pm on Monday also burned down nearly 11,000 Rohingya shanties and over 100 houses of locals.

While visiting the scene, Chattogram Range DIG M Anwar Hossain said the reason behind the flame could not be known yet.

A seven-member probe-body has been formed to investigate the incident, he added.

He also informed the affected Rohingya families would be provided with two bundles of CI sheet, cash and food for two months after making a list.

The additional refugee relief and rehabilitation commissioner, Shamsuzzoha Nayan, said works are being carried out to ascertain the extent of damage.

Hundreds of affected Rohingya people spent night under the open sky on the Cox’s Bazar-Teknaf highway. The homeless people have lost all their belongings in the fire.

Bangladesh is now hosting over 1.1 million Rohingyas in Cox’s Bazar and Bhashan Char in Noakhali. The majority of them came here in August 2017, fleeing persecution in their homeland of Rakhine state in Myanmar.