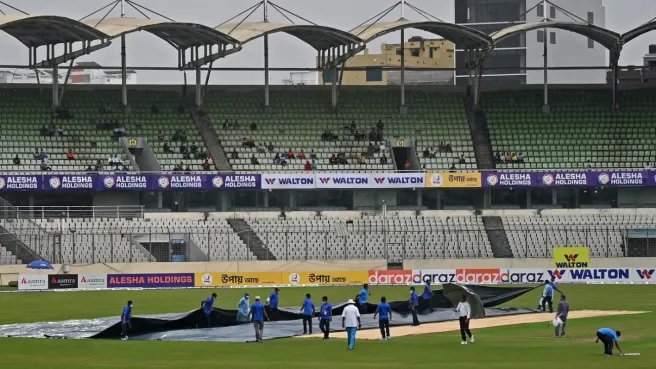 The day two of the second Test between Bangladesh and Pakistan was called off due to a persistent rain at the Sher-e-Bangla National Cricket Stadium on Sunday.
Only 6.2 overs were played out of possible 98 overs of the day before the umpires called it a day as there was no stopping of rain, BSS reports.

Rain and bad light also interrupted the game on day one, allowing just two sessions. The day’s game started after the first session was also lost to rain.

Babar began with a boundary through fine leg off pacer Khaled Ahmed, showing his intention to score quick runs.

Azhar also hit boundary in the second ball he faced off another pacer Ebadot Hossain.

He then struck two consecutive fours of Ebadot’s next over to reach his 34th test fifty off 126 balls.

The rain then again came to finally force the postponement of the day.

Left-arm spinner Taijul Islam, who didn’t bowl a single over on day two, remains the most successful bowler for Bangladesh with 2-49.

Pakistan won the first Test by eight wickets and led the two-match series 1-0.

Wijnaldum rescues PSG after Lens leave Messi in a daze