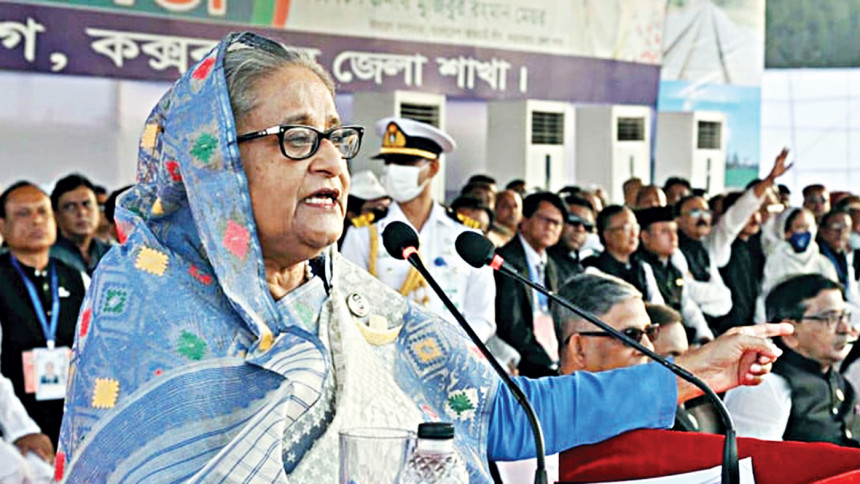 The next general election will be held in the first week of January in 2024, Prime Minister Sheikh Hasina announced at a rally in Cox’s Bazar yesterday.

Addressing the rally at Sheikh Kamal International Cricket Stadium, the prime minister reiterated her call to the people to vote for Awami League to sustain the country’s development.

“I am urging all of you to cast your vote for the symbol of the boat,” she said.

The jubilant people raised their hands when Hasina, also the president of Awami League, asked them if they would vote for her party. She expressed gratitude to the crowd.

The rally, organised by Cox’s Bazar AL, was presided over by its acting president Faridul Islam Chowdhury.

Hasina said that the AL was able to come to power for three consecutive terms as the people gave their verdict in favour of the boat, the party’s election symbol.

“From 2009 to 2022 there is a democratic process in the country leading to unprecedented development in the country. Bangladesh has got recognition as a developing country,” she said.

At the outset of the rally, the PM inaugurated 29 development projects, and laid foundation stones of four schemes involving Taka 1963.86 crore.

PM Hasina highlighted how her government has launched programmes to mitigate the woes of the lower middle class and low-income people.

“As the daughter of the Father of the Nation, it is my duty to look after your welfare as long as I am in power.”

She once again slammed the BNP and its ally Jamaat for causing miseries to the people.

She also mentioned that Khaleda Zia embezzled the money of an orphanage and for that reason she had been convicted of corruption for 10 years.

“And her son Tarique Rahman, known for syphoning off the country’s money, had been convicted for seven years and fined Tk 20 crore.”

Sheikh Hasina also mentioned that Tarique was involved in arms smuggling on 10 trucks.

“I do not know for what purpose he brought those arms.”

The AL chief said that on August 21, 2004, Khaleda and Tarique and their companions had hurled grenades, which are used in wars, on an AL rally, leaving 22 AL members dead.

“But I narrowly escaped with the grace of Almighty Allah.”

“Can a human being kill another human with fire?”

“This movement of the BNP, Tarique Zia and Khaleda Zia is aimed at killing people through arson attacks. They do not know anything but destruction.