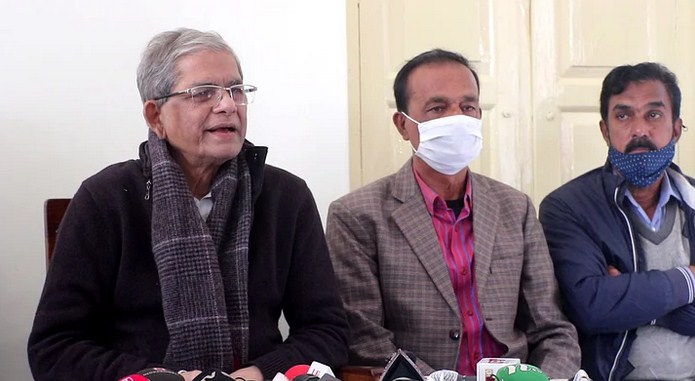 Criticising the Chief Election Commissioner (CEC) and the Election Commisioners (ECs), BNP Secretary General Mirza Fakhrul Islam Alamgir has alleged that people are now calling them ‘thieves’ openly.
“Nobody has interest in elections now. People have lost their respect and faith in the Election Commission. They are blaming them for the massive rigging in polls, and even in face of this (blame), the shameless CEC and ECs defend themselves instead of resign from their posts,” he told journalists at his residence at Kalibari area in Thakurgaon district town on Saturday.
Fakhrul further said, “The CEC and ECs are being called thieves by people. They stole money in the name of speeches and using cars. They had used cars illegally. I’ve lost interest of speaking about them.”
Asked why does BNP take part in elections in such circumstances, the BNP leader said, “We take part in elections to maintain continuity of democracy. We’ve a strategy, and take decisions accordingly. Now we join the polls as part of this strategy.”
Joining polls is the only scope available in present situation to get connected with mass people at grassroots level, he said, alleging that they are deprived of this scope in other circumstances.
On 2018 general election, BNP secretary general said they observed December 30 as Democracy Killing Day.  “People across the world, including countrymen, observed the elections results of December 30 which were manipulated at night on December 29.”
493
Share