After a successful run for over three months, the twelfth season of the popular quiz show Kaun Banega Crorepati came to an end yesterday, i.e. on January 22. The last and final episode was aired yesterday with the weekend’s Karamveer Special edition. While the show made headlines throughout its run for mainly good reasons, it upset many recently, after the senior actor asked a question which was related to IMF’s Chief Economist Gita Gopinath.

During a visual question of Kaun Banega Crorepati 12, a picture of IMF’s Chief Economist Gita Gopinath was put on display. The question asked was, ” The economist seen in this picture has been the chief economist of which organisation?” Upon showing the image, the 77-year-old quipped saying the IMF chief’s face is so beautiful that no one can relate her to the economy. “Itna khoobsurat chehra hai inka, economy ke sath koi jod hi nahi sakta,” said Amitabh in Hindi.

While Amitabh’s comment was made on a positive note (further clarified by him on Twitter) social media users were quick to point out the senior actor’s ‘subtle sexism’. Several took to Twitter and slammed him for making a sexist remark and also comparing ‘beauty with brains’.

“So sad that he just had to mention your looks while pointing to your earned achievement,” wrote one user. Another tweeted, “Blatant sexism displayed by @SrBachchan”. Check out some more reactions. 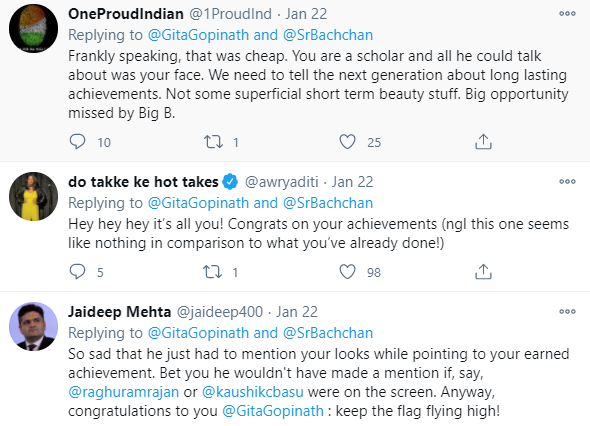 On the other hand, Gita was elated to see a question based on her in KBC 12. “Ok, I don’t think I will ever get over this. As a HUGE fan of Big B @SrBachchan, the Greatest of All Time, this is special!” she tweeted.