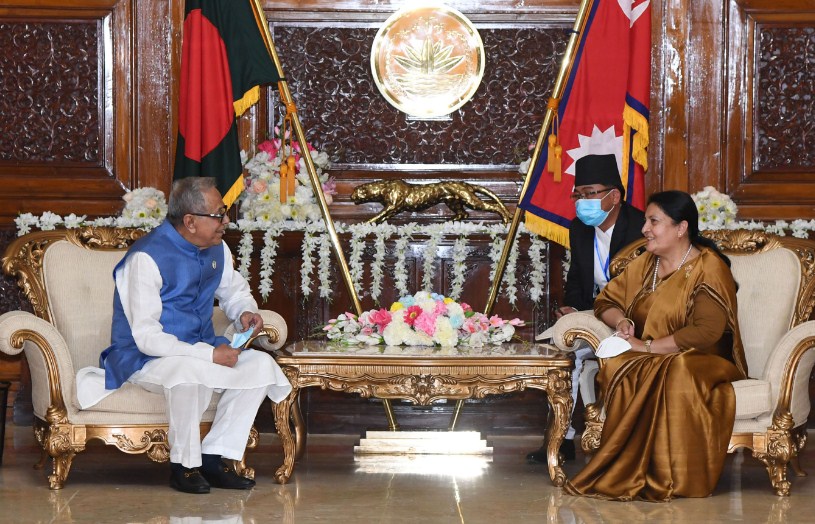 Visiting Nepalese President Bidya Devi Bhandari expressed her keen interest to work together by utilizing the potentials of the two countries as she paid a courtesy call on President M Abdul Hamid at Bangabhaban on Monday evening.
The Himalayan state’s leader reiterated that she was looking forward to explore the potentials with mutual cooperation.
President’s Press Secretary Joynal Abedin told BSS after the bilateral talks followed by a cultural function and dinner.
Bangladesh President hosted the dinner at the State-Dining Hall in honor of Nepalese counterpart, who is on a two-day tour here to attend the twin historic celebrations – Bangladesh’s Independence golden jubilee and birth centenary of Father of the Nation Bangabandhu Sheikh Mujibur Rahman.
Prime Minister Sheikh Hasina, Bangabandhu’s younger daughter Sheikh Rehana, Foreign Minister Dr AK Abdul Momen, Health and Family Welfare Minister Zahid Maleque, Agriculture Minister Dr Muhammad Abdur Razzaque, Commerce Minister Tipu Munshi, PM’s Private Sector Industry and Investment Adviser Salman F Rahman, State Minister for Foreign Affairs Md Shahriar Alam, State Minister for Cultural Affairs KM Khalid, State Minister for Civil Aviation & Tourism Md Mahbub Ali and senior civil and military officials, among others, attended the dinner.
Mentioning that both Bangladesh and Nepal have many potential sectors to explore, Nepalese President called upon the investors and businessmen of both the countries to work together to utilize the existing potentials properly.
She also put emphasis on mutual exchange of visit both in public and private sectors to intensify the existing relations.
Bangladesh President thanked his visiting counterpart and her entourage members for joining the twin mega celebrations coincide with the history of the Bangladesh with deep appreciation for Nepal’s unstinting moral and material support in Bangladesh’s Liberation War and subsequently giving the recognition Bangladesh in January 1972 as an independent state.
Referring to the signing four memorandums of understanding (MoUs) on bilateral issues between Dhaka and Kathmandu, Hamid said the visit of Nepalese President would be a unique milestone to strengthen the existing ties between the two friendly countries.
80
Share