To add more excitement to our festive spirit, makers of Shyam Singha Roy have announced that Sai Pallavi and Krithi Shetty will be the leading ladies for the Telugu-upcoming. The duo will be cast opposite the lead actor Nani who has landed in the title role of the said flick. The movie is Rahul Sankrityan’s third directorial project and if we go by the poster, then it will surely be an interesting one.

The official poster welcoming the lead actresses Sai Pallavi and Krithi Shetty was shared on Twitter on the Dussehra. With Durga Puja celebrations, the makers chose the right opportunity to share the news with fans because if you look carefully, you will observe the imagery of Goddess printed against the red background.

V actor Nani shared the news on his Twitter handle and wrote: “Welcoming team #SSR on this very special day”. Check out the poster here: 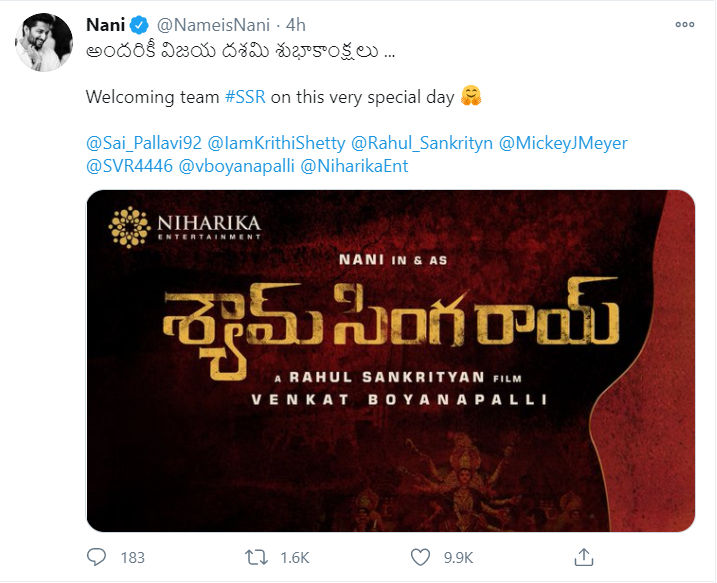 According to the poster, the cast will begin shooting for the movie by December this year. A tentative release date and platform, however, have not been announced.

Currently, Nani is busy shooting for another Telugu-flick, Tuck Jagadish. Due to the COVID-19 pandemic, the movie’s shoot came to a standstill and resumed after 7 months of lockdown. Nani even shared some BTS pictures on his Twitter handle to announce that he has begun shooting for Shiva Nirvana’s next.

As for the professional front of Sai Pallavi, the actress also resumed shooting in September 2020 for the romantic drama Love Story with Naga Chaitanya. Due to the global pandemic, the production and release were postponed.

Meanwhile, Krithi Shetty was last seen in Bucchi Babu Sana’s Uppena. The movie was expected to release by April 2020 but was pushed due to COVID-19 induced condition. Her romantic number, Nee Kannu Neeli Samudra, for the movie was a huge hit amongst her fans.