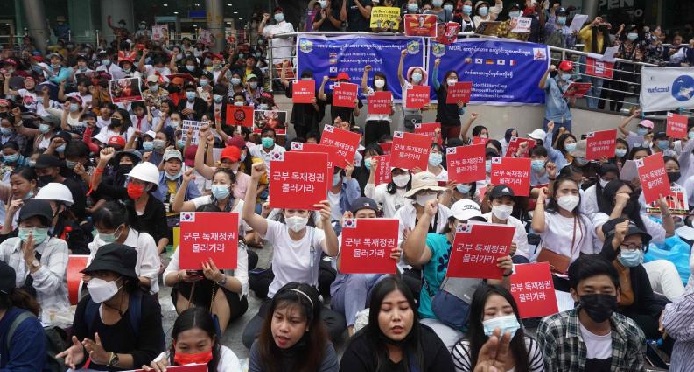 Shops and businesses are expected to close in solidarity, with the nation’s largest retailer, City Mart, announcing it will shut all of its outlets.

The violent crackdown on the largely-peaceful movement risks stunting an already troubled economy. Nearly all private bank branches have closed, while automated teller machines are running out of cash amid surging demand.

“We expect to see the biggest crowd of people across the country on Monday,” said Aung Kyaw Kyaw Oo, a lower house lawmaker representing the National League for Democracy. “We need to keep fighting against the brutal military.”

Myanmar has seen nationwide demonstrations since the military seized control of the country on Feb 1, with protesters ignoring a ban on public gatherings. A 20-year old student who was shot in the country’s capital of Naypidaw was the first casualty last week. Two men were killed and more than 20 people were injured on Saturday as authorities fired shots to disperse demonstrators in Mandalay.

In an apparent warning to protesters, state-run television carried a broadcast notice on Sunday that said while peaceful demonstrations are lawful, undermining stability is not, and authorities may take action.

The youth-led movement has mobilised supporters peacefully in major cities with three main demands: the release of civilian leaders including Aung San Suu Kyi, recognition of the 2020 election results that showed her party won, and a withdrawal of the military from politics. Suu Kyi’s first court hearing began earlier than expected last week, without her lawyer present.

The military has ordered internet blackouts in recent nights as it tightens its grip on power. Facebook Inc has pushed back against the coup, with Reuters reporting that the company removed the military’s main social media page for violations of community standards prohibiting the incitement of violence and coordinating harm.