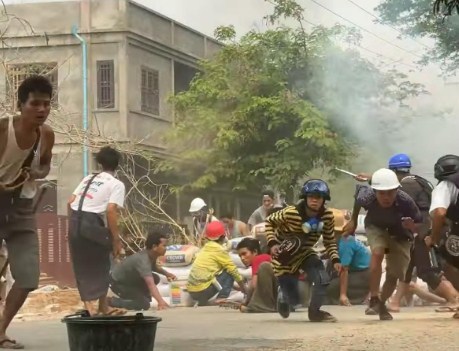 Demonstrators in Myanmar maintained their dogged opposition to military rule on Sunday despite a rising death toll, with two more people killed as the junta appeared equally determined to resist growing pressure to compromise.
The country has been in turmoil since the military overthrew an elected government led by Nobel peace laureate Aung San Suu Kyi on Feb. 1, bringing an end to 10 years of tentative democratic reform.
One man was shot dead and several were wounded when police opened fire on a group setting up a barricade in the central town of Monywa, a doctor there said as a community group issued a call on Facebook for blood donors.
Later, one person was killed and several were wounded when security forces fired on a crowd in the second city of Mandalay, the Myanmar Now news portal reported.
At least 249 people have now been killed since the coup, according to figures from the Assistance Association for Political Prisoners activist group.
The violence has forced many citizens to think up novel ways to express their rejection of a return to army rule.
89
Share

Nehha Pendse on trolls targeting her for marrying a divorcee