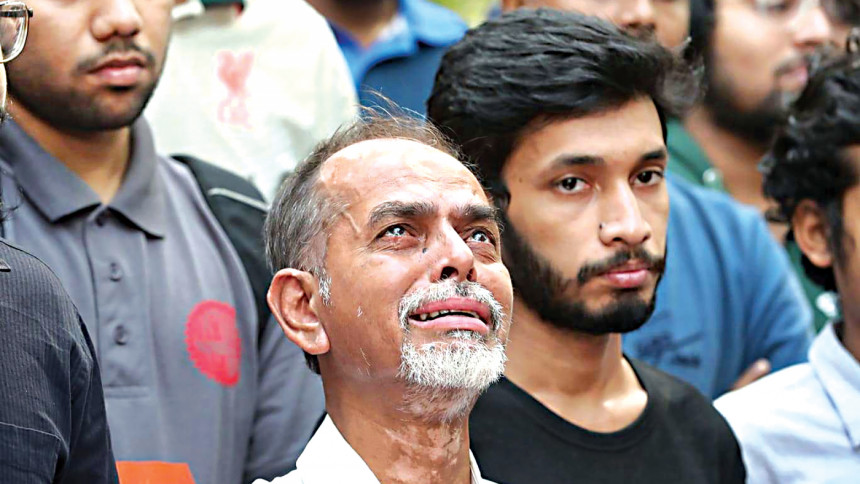 ‘My child can never be a drug addict’

His father Kazi Nur Uddin also said his son did not even smoke and taking drugs were out of the question.

“We filed a case against Fardin’s friend, because she was Fardin’s last known company. My child can never be a drug addict. I don’t at all believe he [Fardin] went to buy drugs,” said Nur while talking to journalists at a human chain organised by Buet students at the Shaheed Minar yesterday.

Fardin had an exam and was supposed to go to the campus from his Demra home for a group study, Nur said.

“I can’t believe that he went to Chonpara to buy drugs. I have three children and none of them can stand smoking. My son was a coaching teacher of Udvash, and would to go to Biswa Sahitya Kendra. None of his friends can say Fardin smokes. If he does not have a habit of smoking, there is no question of him becoming addicted to Phensedyl,” Fardin’s father said.

“We have spoken to the doctors who performed the autopsy. The doctors did not give us any information that drugs were found in his system. The issue of involvement in drugs is an attempt to fabricate and sensationalise the situation. It is a well-planned murder,” he added.

He said, “My son was a good debater. I heard that my son was beaten to death by six or seven people. Fardin was killed by severe blows to the head and chest … the killers targeted his heart and mind … those who killed him were not in favor of his creative thinking.”

Fardin’s father was angry that a media outlet reported that Fardin was murdered when he was buying drugs.

“Such fabricated reports hamper the investigation work. It breaks the morale of those who are demanding trial …”

Buet students have been demanding thorough investigation of the murder and sought fair trial.

Meanwhile, Commander Khandaker Al Moin, director of legal and media wing of Rab, told The Daily Star around 11:15pm that they have found evidence of Chonpara slum’s drug peddler Rayhan Mahmud and his gang’s involvement in the murder.

On Saturday, Rayhan, an associate of the slain City Shaheen, was picked up by law enforcers in Barisal, claimed his family members.

She told The Daily Star that officers alleged that her husband killed the Buet student. “But my husband is not involved in the murder. He was home asleep when it happened.”

Shaheen Miah alias City Shaheen, 35, wanted in 23 cases was killed in “crossfire” with Rab on Thursday.