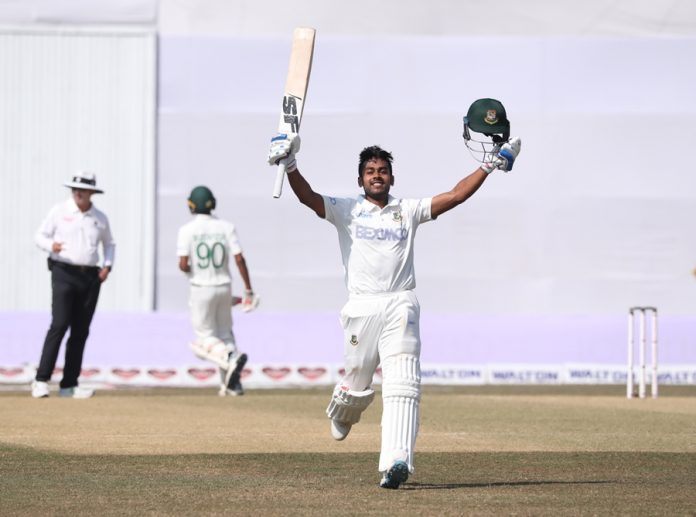 Mustafizur Rahman’s early success with the ball put Bangladesh in a commanding position at the end of day two of Chattogram Test against West Indies on Thursday.

At the end of the day, West Indies are batting at 75 for two in 29 overs with captain Kraigg (49*) and Nkrumah Bonner (17*) in the middle. They are trailing by 355 runs in the first innings.

Bangladesh got early success when Mustafizur, the only pacer for Bangladesh in this game, removed John Campbell in the fifth over. The left-arm pacer pulled of the debutant Sheyne Moseley as well during the 11th over

Earlier, riding on the maiden Test ton by Mehidy Hasan Miraz, Bangladesh scored 430 after winning the toss and opting to bat first in the first match of the two-match series.

Most of the top-order batsmen managed solid starts but couldn’t translate them into big innings. Mehidy came in at number eight and ended up posting 103 off 168 balls with 13 fours.

Along the way, he became only the fourth Bangladeshi batsman after Khaled Masud, Mahmudullah Riyad and Sohag Gazi to have scored a Test ton at number eight. And at the same time, he is now the only fifth Bangladeshi to register at least a five-wicket haul and a century in Tests.

While recording his maiden Test century, Mehidy partnered Shakib and Nayeem Hasan to generate two fifty-plus partnerships at the seventh and ninth-wicket stand.

They ended day one posting 242 for five with Shakib Al Hasan and Liton Das in the crease. They, however, failed to carry on. Shakib ended up scoring a fifty in his comeback Test after serving a two-year ban, with one year suspended, imposed by the ICC for failing to report corrupt approaches.

Liton fell prey to West Indies’ most successful bowler in this match so far, Jomel Warrican, for 38. Nayeem, who took the field as the ninth batsman, posted 24 before falling to debutant Nkrumah Bonner.

Facebook faces a reckoning in Myanmar after blocked by military