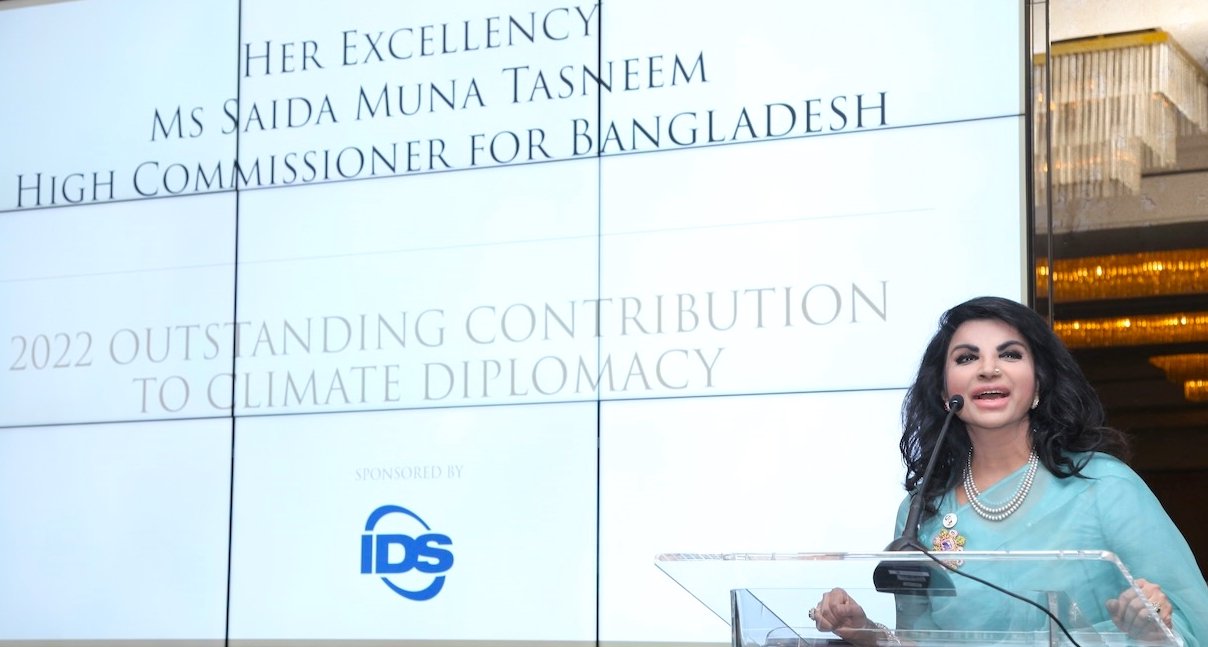 Bangladesh High Commissioner to the UK Saida Muna Tasneem was adorned with the prestigious ‘Diplomat of the Year 2022 Award’ for ‘Outstanding Contribution to Climate Diplomacy’ by the world-famous Diplomat Magazine, UK.

The award was handed over to the high commissioner by the editor of the Diplomat Magazine at an event at London’s Biltmore Mayfair in the presence of over 250 London-based diplomats on Monday, said a press release received on Thursday, reports BSS.

This is the first time that a Bangladeshi diplomat has received such recognition in the UK, it added.

The Diplomat Award of the Year is an annual award given out by Diplomat Magazine UK based on nominations and votes cast by UK-based envoys of more than 165 countries who maintain resident missions in London.

In 2022, in total, ten diplomats were adorned with the ‘Diplomat of the Award’ from 07 regions of the world.

“High Commissioner Ms Saida Muna Tasneem was recognised for her outstanding contributions and leadership in championing climate diplomacy in London in the lead up to the COP26 as well as for her sustained initiatives to strengthening Bangladesh-UK diplomatic relations,” said Diplomat UK editor Venetia de Blocq van Kuffeler while conferring the award.

Bangladesh high commissioner thanked envoys based in London for nominated her for the award.

“I owe this award to our Hon’ble Prime Minister Her Excellency Sheikh Hasina who has given me the opportunity to showcase Bangladesh’s climate diplomacy in London during the crucial year of COP 26 and Bangladesh’s Climate Vulnerable Forum Presidency,” Muna said while receiving the Award.

The envoy dedicated the award to millions of climate migrants and victims of climate catastrophes in Bangladesh and the rest of the world.