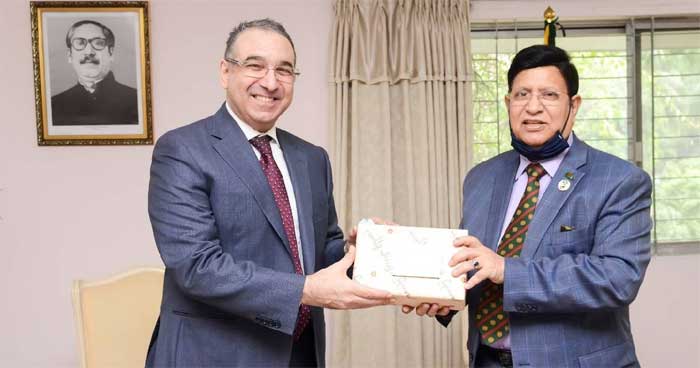 Foreign Minister Dr A K Abdul Momen on Sunday urged Egypt, a leading member-state of OIC, to continue its support to Gambia regarding its case with the International Court of Justice (ICJ) against Myanmar for committing atrocities to Rohingyas.

Dr Momen made the urge while outgoing Egyptian Ambassador to Bangladesh Walid Ahmed Shamseldin made his farewell call on him in the capital.

The Egyptian envoy assured the foreign minister that his country’s support on Rohingya repatriation will be continued.

Gambia had brought the case against Myanmar to the ICJ with the backing of the Organisation for Islamic Cooperation (OIC), Canada and the Netherlands.

At the December hearing, Gambia accused Myanmar of breaching the 1948 UN Genocide Convention through a bloody military campaign with an aim to “get Myanmar to account for its action against its own people: the Rohingyas”.

Bangladesh is hosting over 1.1 million forcefully displaced Rohingyas in Cox’s Bazar district and most of them arrived there since August 25, 2017 after the military crackdown at their homeland.

During the meeting, apart from the Rohingya issue, Dr Momen laid emphasis on further strengthening the bilateral trade and investment relations between the two friendly nations.

The minister urged Egypt to set up petro-chemical plant in Bangladesh while the envoy informed that his country is interested regarding this.

Momen also urged the Egyptian entrepreneurs to invest in the Bangladesh economic zones while they can take advantage out of the country’s large number of IT professionals.

Majority will accept US election result, even if they dislike the winner: Reuters