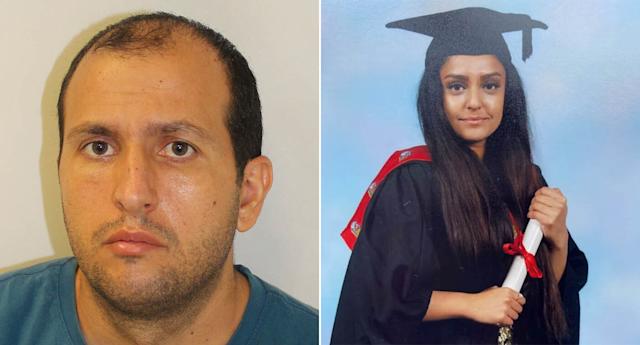 A British court has sentenced a man arrested in connection with the murder of British-Bangladeshi school teacher Sabina Nessa to life in prison.
Koci Selamaj, 36, killed Ms Nessa in a park in Kidbrooke, south-east London in September 2021.

CCTV footage captured him striking the 28-year-old over the head until she was unconscious, before carrying her away, BBC reports.

He then strangled her, removed some of her clothes and tried to hide her body.

Selamaj, a garage worker from Eastbourne in East Sussex, travelled to London on 17 September intending to assault a random woman after he was spurned by his estranged wife, the Old Bailey heard.

Ms Nessa, who taught a year one class at Rushey Green Primary School in Catford, was found nearly 24 hours later near a community centre in the park.

Days later, Selamaj, from Eastbourne in East Sussex, was arrested in the seaside town. He pleaded guilty in February to her murder.

On Friday, he refused to come to the Old Bailey and was sentenced in his absence.

Mr Justice Sweeney described the “savage” attack as sexually motivated. He said Ms Nessa was the “wholly blameless victim of an absolutely appalling murder which was entirely the fault of the defendant”.

It is believed Ms Nessa had only gone through the park as she was running late and this was the quickest route to the bar where she had been due to meet a friend.

Grainy footage showed a hooded man passing her, looking back at her, and running toward her before hitting her over the head 34 times in quick succession.