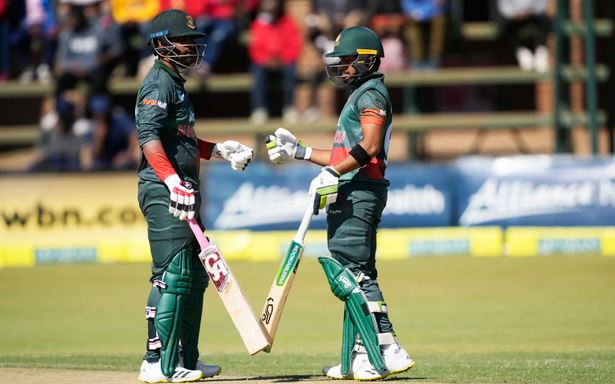 Mahmudullah Riyad hit an unbeaten 80 and skipper Tamim Iqbal struck a fluent 50 as Bangladesh compiled 290-9 in the second ODI of the three-match series against Zimbabwe at Harare Sports Club on Sunday.
The game turned to be a ‘do or die game for Bangladesh after they lost the first game by five wickets despite putting up 303-2 on the board.

Mahmudullah’s 80 not out came off 84 balls with the help of three fours and as many sixes. But despite his presence, Bangladesh scored just 44 runs in the last five overs against an inexperienced Zimbabwe bowling attack that included two debutant bowlers—Brad Evans and Tony Munyonga, BSS reports.

However, they comparatively were better than in the first game in which they made 39 runs in the last five overs.

Zimbabwe captain Regis Chakabva once again won the toss and opted to bowl first in a bid to win their first ever ODI bilateral series against Bangladesh after 2013.

The Tigers which made three changes for this crucial game got a good start thanks to the captain Tamim, who faced 45 balls for his 50, that studded with 10 fours and one six. It meant Tamim’s 46 runs came from just 11 runs while the rest of the 34 balls fetched him just four runs. It again brought Tamim’s failure to rotate the scoreboard to the fore.

Tamim and Bijoy’s departure in the space of three overs left Bangladesh in trouble as the scoreboard lost its pace. Both Najmul Hossain Shanto and Mushfiqur Rahim, the key batters of the  middle order got their start but were dismissed on 38 and 25 runs respectively.

Mahmudullah then took the onus alongside Afif Hossain who was more fluent than his senior colleague. Afif’s run-a-ball-41 was key in helping the side take closer to 300 runs mark.

Mahmudullah whose 26th half-century came off 69 balls tried to push for a big shot in the last powerplay but he failed to score as was expected on the benign pitch.

Zimbabwe earlier made five changes from their winning first ODI squad in a bid to make some experiments against an experienced team.

Sikandar Raza, the match winner of the first game however was their most successful bowler in this game with 3-56 while Wessly Madhevere took 2-40.