Krack is all set to release theatrically on January 9

Telugu superstar Ravi Teja gave the perfect New Year treat to his fans after he shared the official trailer of his upcoming film Krack on the first day of 2021, i.e. on January 1. The upcoming film is one of his highly anticipated films considering the fact that past films of the actor did not do well at the box office. For your information, Krack‘s shoot was halted which further delayed the release due to the coronavirus pandemic.

But come New Year and the actor’s policeman look in the trailer won over his fans. Ravi, who will portray the role of a cop, received a positive response from his die-hard fans as and when the trailer dropped online.

Reports had it that the producers were planning for an OTT release but as per the latest information, the film is all set to release on January 9, a few days before the festival of Makar Sankranti. 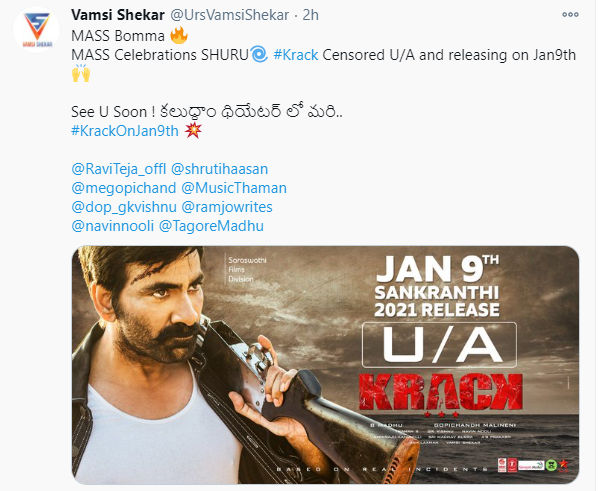 Taking to Twitter, Ravi shared the official trailer of the film on the occasion of New Year. “Here’s our new year treat for you all!! Hope you enjoy it #KRACK #KrackTrailer Thank you @VenkyMama for lending your voice to the trailer!@megopichand @shrutihaasan @varusarath @thondankani @TagoreMadhu @dop_gkvishnu @MusicThaman #HappyNewYear2021,” read his tweet.

Give utmost priority to human rights and rule of law, PM urges police