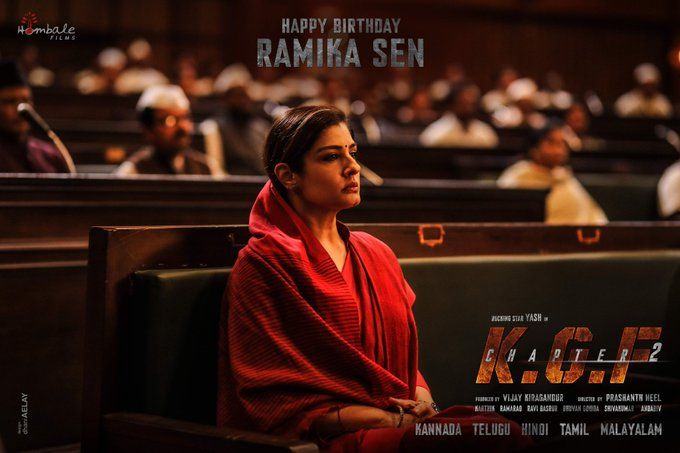 The excitement around KGF: Chapter 2 went up soaring high when Bollywood’s big celebrities like Sanjay Dutt and Raveena Tandon joined the star cast. The makers of the film are making sure that the excitement never fades by releasing new posters and the first looks of the actors on their birthdays. Earlier, the makers had revealed Sanjay Dutt’s look as Adheera on the actor’s birthday.

Today, as we all know, actress Raveena Tandon celebrates her birthday. Although it was earlier revealed that she will be playing the role of Prime Minister in the film, her look was not revealed until now. The team surprised Raveena’s fans on her birthday with the actress’ first look poster.

Have a look at the power packed poster here:

Director Prashant Neel shared the poster on his Twitter handle and wrote, “THE Gavel to brutality!!! Wishing the powerhouse #Ramikasen, @TandonRaveena a very Happy Birthday.”

In 2018 blockbuster KGF: Chapter 1, there were mentions of the character Ramika Sen, a powerful political figure. The people, who held the world of KGF under their control, feared that Ramika Sen would spoil the kingdom that they have built. The first look of Ramika Sen, revealed today, lives up to the build up that was given for the character. Raveena Tandon is seen cladding a red saree and sitting in what looks like a legislative assembly. This has made the audience to expect the entrance of political powers into the world of KGF.

For the unversed, KGF: Chapter 2, directed by Prashanth Neel, is a sequel to 2018 film KGF: Chapter 1. The film has Kannada superstar Yash playing the lead role. Apart from Sanay Dutt and Raveena Tandon, the cast also includes Srinidhi Shetty, Achyuth Kumar, Prakash Raj ,Vasistha Simha and others.  While Raveena Tandon has completed shooting her portions long back, Sanjay Dutt is expected to join the team in November to film his final portions . The film is expected to hit the theatres early next year.