Leaving fans delighted, Kareena Kapoor Khan made her Instagram debut earlier this year. And with each post, the stunner has proved that she is the ultimate social media queen. From sharing aww-worthy family photos to putting up stunning portraits of herself, Kareena’s Insta feed is absolutely LIT. Even the actress’ birthday posts for her friends and family members are worth making headlines. Bebo’s bestie Mallika Bhat is celebrating her birthday today, and to wish her BFF on her special day, Kareena shared a throwback photo.

In the snap, the actress can be seen posing with her girl gang. Apart from the birthday girl, one can also see the sister duo – Malaika Arora and Amrita Arora.

Flaunting her radiant skin sans makeup, Kareena can be seen wearing a strappy top in the snap. She captioned her post, “Happy birthday my BFF, Malikzzzzz Love you forevaaaaa @mallika_bhat.” 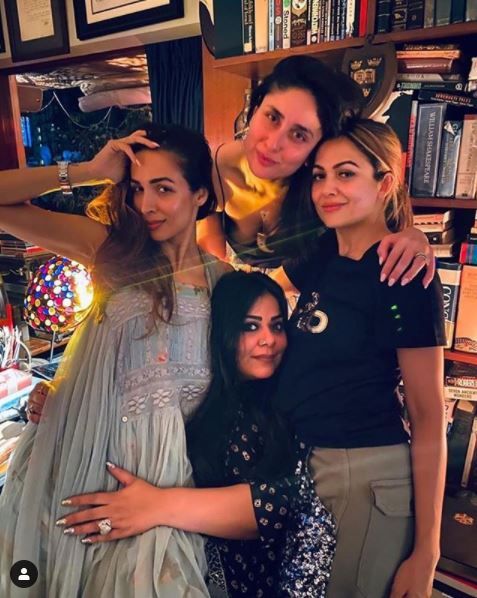 Meanwhile, Kareena has been in the limelight ever since it was announced that the actress is expecting her second child with Saif Ali Khan. The power couple is already doting parents to their son, Taimur Ali Khan. Kareena is often spotted in the city, shelling out major maternity style goals.

On the work front, the actress recently resumed work for her upcoming film, Lal Singh Chaddha. The movie is the Hindi adaptation of Tom Hanks’ Forrest Gump and features Aamir Khan as the male lead. Earlier, it was reported that Kareena’s baby bump will be covered in the movie using VFX. Lal Singh Chaddha was scheduled to hit the screens this year, but sometime back its release date was moved to Christmas 2021.

Apart from this, Kareena also has Karan Johar’s Takht in the pipeline. The period drama is set in the Mughal era and will also feature Alia Bhatt, Ranveer Singh, Janhvi Kapoor and Vicky Kaushal in lead roles.