Kangana refutes AIIMS report: Sushant said he was being bullied and outcast

Kangana Ranaut has been making the news headlines for the past five months owing to her alleged battle against nepotism exhibited by the film industry. The actress has taken over the internet with her on the ball tweets and controversial confrontations especially in light of the untimely demise of actor Sushant Singh Rajput. The actress recently shared a tweet seeking answers to Sushant’s death where she refuted the report by AIIMS that termed late actor’s death “a case of hanging and death by suicide”

For the uninitiated, an AIIMS report today ruled out the murder claim in Sushant’s death case. Sudhir Gupta, Chairman of AIIMS Forensic Medical Board said “There were no injuries on the body other than of hanging. There were no marks of struggle/scuffle on the body and clothes of the deceased.”

It seems like this report did not sit well with Kangana who took to Twitter and penned a tweet that read: “Young and extraordinary individuals don’t just wake up one fine day and kill themselves. Sushant said he was being bullied and outcast, he feared for his life, he said movie mafia banned him and harassed him, he was mentally affected by being falsely accused of rape #AIIMS” 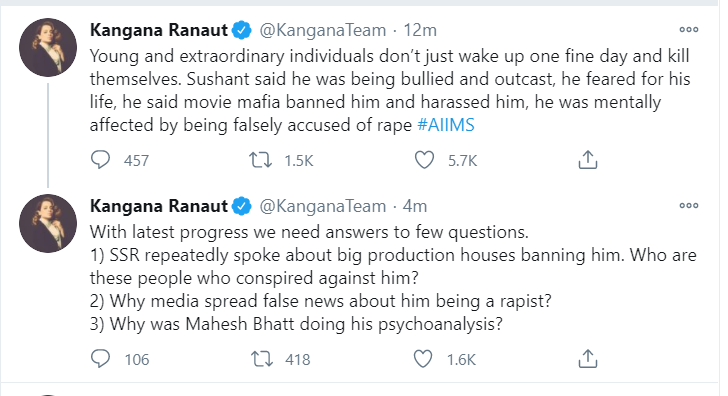 Along with this reaction to AIIMS report, the actress went onto ask some sharp questions with respect to the latest progress on the Sushant’s death case. She wrote: “With latest progress, we need answers to few questions. 1) SSR repeatedly spoke about big production houses banning him. Who are these people who conspired against him? 2) Why media spread false news about him being a rapist? 3) Why was Mahesh Bhatt doing his psychoanalysis?”

Her latest tweets have garnered considerable support from social media users who themselves have been waiting for clarity on Sushant’s death case.

‘Please spare their houses,’ says Kangana Ranaut as BMC serves notices to all her neighbours

As for Kangana, the actress has been calling out names from within the industry in light of nepotism and the drug angle nexus. Apart from maintaining an active online presence, the actress has resumed shooting for her upcoming biographical flick Thalaivi.

Sneha Ullal on comparison with Aishwarya Rai: I am comfortable in my own skin