The final cast for Telugu remake of 2018 Hindi blockbuster AndhaDhun has officially been locked! The Sriram Raghavan film, which originally starred Ayushmann Khurrana, Tabu and Radhika Apte in lead roles, will now see Nithiin, Tamannaah Bhatia and Nabha Natesh taking over the baton; whereas director Merlapaka Gandhi has stepped in to headline the project. The shooting is expected to begin in the month of Novembee this year.

The makers have just released an official statement elaborating on who will essay which role in this much-anticipated Telugu remake. Speaking of which, it can now be confirmed that Nithiin will play Ayushmann’s character, Tamannaah Bhatia will step into Tabu’s shoes while Nabha will play Radhika Apte’s role. It’ll be interesting to see how well they’ll pull off their roles and live up to the original.

“Hero Nithiin’s new film under the direction of Merlapaka Gandhi, official remake of Hindi superhit AndhaDhun, will start rolling from November. Tamannaah Bhatia and Nabha Natesh have been finalised to reprise Tabu and Radhika Apte’s roles respectively. Tabu won crictical acclaims, besides securing several awards, including Filmfare Award. Now, Tamannaah accepts the challenge to play the role with lots of shades. Every character in the film has good importance and Nabha Natesh is happy to play the leading lady”, reads the official statement. 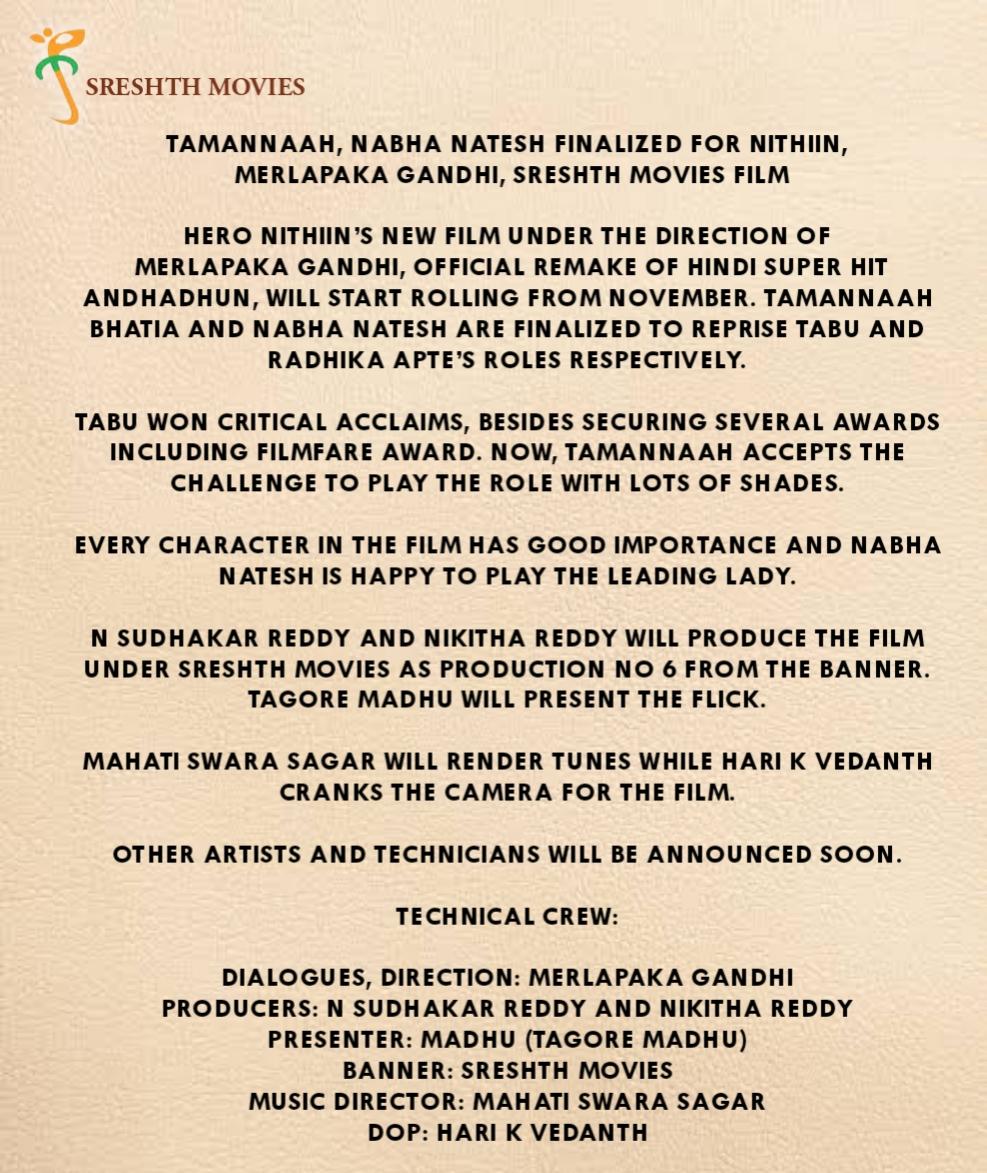 For the uninitiated, AndhaDhun is packed with hairpin bends and black comedy that centres on a seemingly harmless lie, the faking of disability, that unravels in spectacular fashion for a pianist, his girlfriend, a former actor, his wife and her lover, and a trio of organ harvesters. Akash, a piano player pretending to be visually-impaired, unwittingly becomes entangled in a number of problems as he witnesses the murder of a former film actor.

How excited are you for the Telugu remake of AndhaDhun? Tweet to us @ZoomTv and share your thoughts.