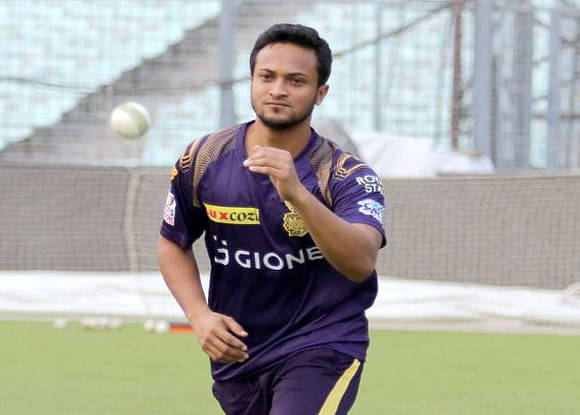 Ace all-rounder Shakib Al Hasan has been roped in by Kolkata Knight Riders (KKR), his old team, for the upcoming season of Indian Premier League (IPL).
Auction for the new season of IPL took place on Thursday afternoon, and Shakib was listed in the second set. Shakib’s base price was INR 2 crore.
KKR bid first for Shakib at his base price, but Punjab Kings raised the bar to Rs 2.2 crore. But KKR bid again with Rs 2.4 crore and Punjab raised it to Rs 2.6 crore. And finally, KKR bid again with Rs 3.2 crore for Shakib.
Shakib had previously enjoyed himself at KKR, winning two titles for them. He also played for Sunrisers Hyderabad for two seasons.
Overall, Shakib played 63 games in IPL and amassed 746 runs with 59 wickets. He has always been one of the best all-rounders of this T20 league.
Meanwhile, along with Shakib, Mustafizur Rahman, Mahmudullah Riyad, Mohammad Saifuddin and Mushfiqur Rahim, who announced himself available for auction later, are also part of this auction. However, apart from Shakib and Mustafizur, chances are lean for others.
39
Share

Nawazuddin Siddiqui to step in the role of antagonist in Thalapathy Vijay’s next?