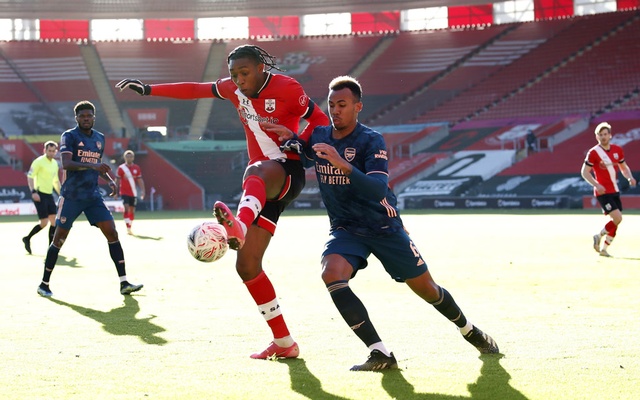 Holders Arsenal bowed out of the FA Cup in the fourth round in disappointing fashion as Gabriel’s first-half own goal condemned them to a 1-0 defeat at Southampton on Saturday.

The Gunners’ defence of the trophy they won by beating Chelsea last August ended with something of a whimper as Mikel Arteta’s side struggled with repeatedly sloppy defending, reports Reuters.

Southampton deservedly took the lead in the 24th minute when Kyle Walker-Peters drilled a low cross into the area and Gabriel inadvertently touched it past keeper Bernd Leno.

Arsenal could have fallen further behind with home striker Danny Ings going close for the hosts on several occasions.

The visitors did apply some second-half pressure but Southampton were comfortable as they held on to set up a fifth-round clash with Wolverhampton Wanderers.

It was Southampton’s first FA Cup win over Arsenal, and the first time they had beaten Cup holders since 1902.

“We had in the first half more punch and more power,” Southampton manager Ralph Hasenhuttl said.

“In the second half it’s normal they have a lift. We must make the second goal. We made one or two chances — Shane Long should have got a penalty.

“It was a good team performance today.”

With a busy Premier League spell coming up, including another trip to Southampton in midweek, Arteta made some changes with the likes of Alexander Lacazette, Bukayo Saka and Thomas Partey amongst those on the bench.

Pierre-Emerick Aubameyang was also missing from the squad for personal reasons.

But that was no excuse for a lacklustre first half in which Southampton’s pressing game proved too much for the visitors.

Southampton’s goal was a case in point. Arsenal’s Mohamed Elneny was hounded into conceding possession, Southampton then switched play to the right with James Ward-Prowse feeding Walker-Peters whose cross was diverted in by a sliding Gabriel.

It was the first goal Arsenal had conceded since Boxing Day.

Ings hit the woodwork shortly after the break, although his effort would have been offside, before Arsenal finally began to offer some attacking threat.

Arteta sent on Partey and Saka and shortly afterwards they had their best chance when Rob Holding side-footed over the bar when a cross from Hector Bellerin fell kindly for him.

Are Natasha Dalal’s viral photos from her sangeet ceremony with Varun Dhawan? Here’s the truth