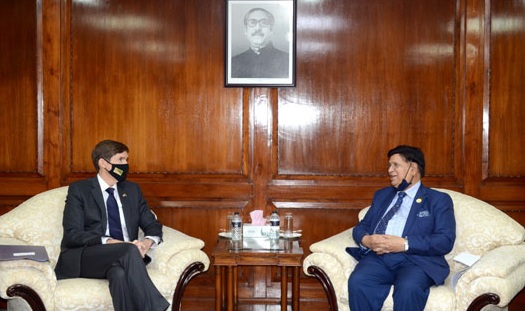 A high-level dignitary of the US Biden administration is likely to visit Bangladesh to attend the year-long celebration marking the birth centenary of Father of the Nation Bangabandhu Sheikh Mujibur Rahman and 50-year anniversary of the country’s liberation.

Besides, there is possibility of receiving video message from US leadership on the occasion of the upcoming 10-day long celebration in this month.

This was revealed while US ambassador to Bangladesh Earl Miller called on foreign minister Dr AK Abdul Momen at the foreign ministry on Tuesday, a press release said in Dhaka on Wednesday.

While visiting the US last month, Momen invited US Secretary of State Antony Blinken to visit Bangladesh this year to participate in the yearlong celebration, visit the Rohingya camps and witness the socio-economic development Bangladesh has achieved.

During the meeting, Miller expressed willingness to work closely with Bangladesh government to follow up the discussion that Dr Momen had in Washington DC with his counterpart and other high dignitaries.

Dr Momen termed his visit in Washington DC on February 23-27 as a successful one, and stated that he had a very fruitful discussion with his counterpart Blinken while the US Ambassador informed that he received good feedback from his Capital over the meeting.

The foreign minister mentioned his talks, during the visit, with US Special Envoy for Climate John Kerry, UN Secretary General Antonio Guterres and five US lawmakers and about his participation in three events organized by US Chambers, Newlines Institute and the Council on Foreign Relations (CFR) respectively.

Momen recalled that he requested the US Secretary of State to appoint a Special Envoy on Rohingya, in order to monitor and put pressure on Myanmar to ensure safe and dignified repatriation of the forcibly displaced Rohingyas.

During the visit, he also called for suspension of GSP facility and imposition of economic sanction on Myanmar by the US.

He also reiterated, during the visit, Bangladesh’s strong expectation that the US Administration would facilitate the deportation of Rashed Chowdhury, the convicted killer of Bangabandhu.

Bangladesh Foreign Minister also called for legalization of undocumented Bangladeshis in the US during his meetings with US lawmakers.

During the meeting with the US Chambers, Foreign Minister Dr Momen asked for a three-year moratorium on US tariff on Bangladesh’s exports, and also proposed that Bangladeshi readymade garments can be exempted from tariff in exchange of fulfilling the condition of using US cotton.