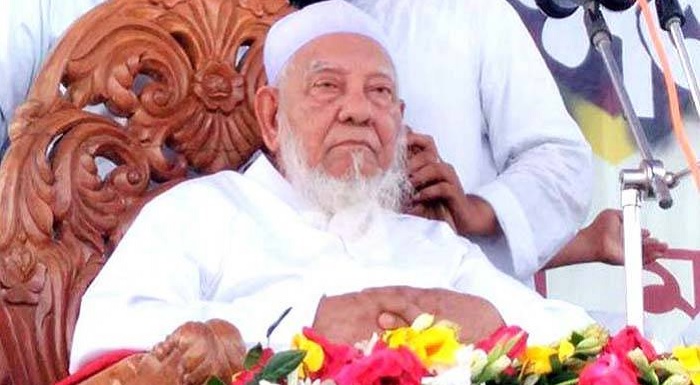 Hefajat-e-Islami ameer Allama Ahmad Shafi is no more. Inna Lillahi Wa Inna Ilaihi Rajiun.
He was 105.
He breathed his last on Friday evening while undergoing treatment at Asgar Ali Hospital in Dhaka.

Earlier, Allama Shafi was brought in Dhaka at about 4:30pm by an air ambulance from Chattogram. He breathed his last at about 6:40pm at Asgar Ali Hospital at Distillery Road, Gandaria in Dhaka after he was admitted there.

Earlier, Allama Shafi was admitted to the Chittagong Medical College Hospital (CMCH) late Thursday night. He was undergoing treatment at the intensive care unit (ICU) of the CMCH.

The 105-year-old Allama Shafi, a top Qawmi alem, had been suffering from various old-age complications including diabetes and high blood pressure. He was also admitted to different hospitals several times earlier. He had developed a number of complications in his body over the last several months.

He received his primary education from his family. Then he joined Al-Jamiatul Arabiatul Islamia and spent five or six months there. He was admitted to Al-Jamiatul Ahlia Darul Ulum Moinul Islam Madrasa in Hathazari in 1926 at the age of 10. In Hathazari Madrasa he studied for 10 years. Then Shafi went to Darul Ulum Deoband for higher studies in the field of Hadith and Tafsir.

He studied there for four years before returning to his homeland Bangladesh. During his study time at Darul Ulum Deoband he became close to Hussain Ahmed Madani and later he became his most youngest official successor from the Indian subcontinent. Ahmed Shafi was the leader of Hefajat-e Islam Bangladesh.

Ahmad Shafi commenced his career as a teacher at  Hathazari Madrasa in Chittagong. In 1986-1987, he served as rector (Head of the University Madrasa) of Hathazari Madrasa. Shafi was also the chairman of Bangladesh Qawmi Madrasah Education Board until his death.

In 2013, a speech given by Ahmad Shafi at Hathazari, Chittagong was described as highly misogynist. He reportedly said: “Why are you sending your daughters to work in garment factories?… She goes to work after Fajr at 7/8:00am and does not come back even at 8/10/12 at night… You do not know which man she is hanging out with. You do not know how much zina (fornication) she is getting involved in.”

The comments caused outrage among woman rights activists who demanded his imprisonment. Sheikh Hasina, the prime minister of Bangladesh termed the statement “disgusting” and “distasteful”.

ADB vows to work with Asia for recovery from COVID-19