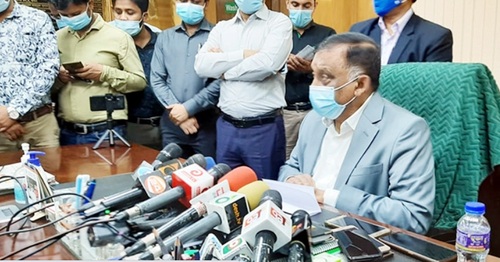 Govt to take stern action if ‘unruly behaviour not stopped’

Home Minister Asaduzzaman Khan has called for stopping unruly behaviour by Hefazat-e-Islam Bangladesh activists in the name of observing hartal.

“The government will take a tougher stand to safeguard people’s lives and properties,” he said while talking to newsmen at his office at the secretariat in Dhaka on Sunday.

The Home Minister said some unruly individuals and groups, being instigated by the religious fundamentalism, have been plundering government’s properties at Hathazari upazila in Chattogram district, and Sadar, Sarail and Ashuganj upazilas in Brahmanbaria district. They have been attacking upazila parishad offices, police stations, land offices, police outposts, railway stations, houses of political leaders and press clubs.

“We call upon all concerned to stop such vandalism and destruction. Otherwise, the government will take a firm stand to protect the lives and properties of people,” he said.

The Home Minister said the government has been observing that some vested quarters are using orphans and little children of different madrasas. They are becoming the real victims of the attacks.

Akshay Kumar’s FIRST LOOK from Atrangi Re out!