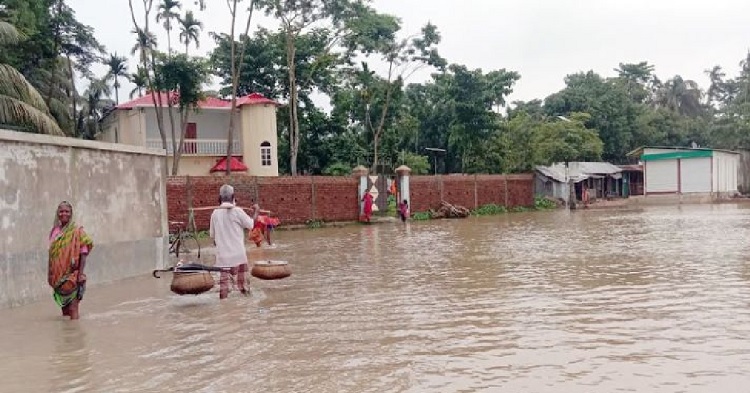 Heavy rains and onrush of upstream hilly waters have worsened the flood situation in Sunamganj and Sylhet districts leaving thousands of villagers marooned in their inundated homes.

In Sylhet, the low-lying areas of the district have been flooded due to onrush of water from the upstream, rendering nearly one lakh people marooned, officials said on Monday, reports UNB.

The flood situation is also serious in the bordering Kanaighat, Companiganj, Jaintapur and Jakiganj upazilas of the district as the water levels of three rivers are flowing above danger marks.

According to the Water Development Board, Surma River was flowing 1.28 cm above its red mark at Kanaighat point while 10.49 cm at Sylhet point.

Besides, Kushiara was flowing 65 cm above its danger level at Amalshid point and 8.74 cm at Fenchuganj point around 9 am.

Sari River too was flowing 0.8 cm above its red mark in Goainghat upazila.

The flood situation in Kanaighat upazila remains static but it worsens in Haor areas.

The floods have marooned many several hundred villagers who are facing scarcity of pure drinking water and lack of transports to go around.

Many roads were submerged while flood water entered many educational institutions in the upazila.

In Sunamganj, all rivers of the district were flowing above the danger mark due to the onrush of hill water and torrential rains for the last couple of days, officials said on Monday.

Be vigilant against arson in the name of political programs: DMP commissioner