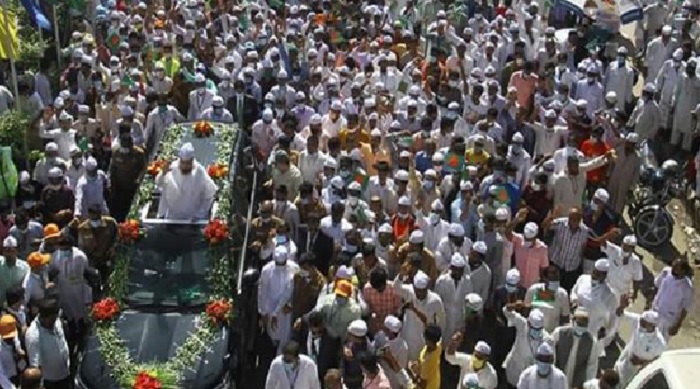 Holy Eid-e-Miladunnabi, the day of birth and demise of Prophet Hazrat Muhammad (pbuh), is being observed across the country through religious fervour.
Apart from holding discussions on the eventful life of Prophet Muhammad (pbuh), colourful processions (Jashne Julus) were brought out in different parts of the country including Dhaka and Chattogram.
On this day in 570 AD, the 12th of Rabiul Awal of the Hijri calendar, Muhammad (pbuh) was born in Makkah of Saudi Arabia with divine blessings and messages of peace for mankind. He also passed away on the same day.

The day is a public holiday.

The Muslims across the country joined special prayers marking the day.

Taking part in the processions, the Muslim devotees also strongly protested releasing the cartoons on the Prophet (pbuh) in France.

In Dhaka, a jashne juluse was brought out from the Institution of Engineers premises. Hundreds of peace-loving Muslims took part in the procession following the health guidelines.

Earlier, a doa mahfil and discussion was organised at the the Institution of Engineers premises where the speakers discussed the significance of Eid-e-Miladunnabi.

Speaking at the discussion, Anjumane Rahmania Moinia Maizbhandaria’s president Saifuddin Ahmed called upon the Muslim ummah to be united for protecting the Islam and Muslims.
62
Share