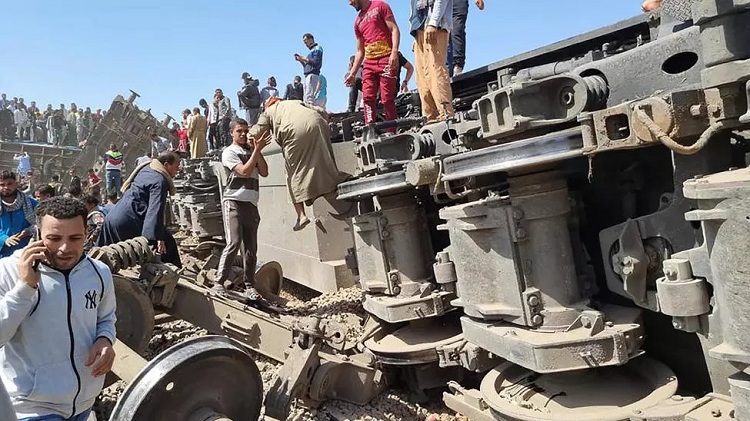 At least 32 people were killed and 66 injured Friday when two passenger trains collided in southern Egypt, the health ministry said, the latest deadly rail accident to hit the country.

President Abdel Fattah al-Sisi pledged tough punishment for those responsible for the crash, which came as his government wrestles with another major transport challenge, a giant container ship blocking the Suez Canal and causing huge traffic jams at either end.

The health ministry said dozens of ambulances rushed to the scene in the Tahta district of Sohag province, some 460 kilometres (285 miles) south of the capital Cairo after the two trains collided.

“32 people were killed and 66 injured” and transported to hospital, the statement said.

Dozens of people gathered around an overturned carriage lying on its side. Springs and twisted metal jutted out from the wreckage of another, an AFP correspondent reported.

At least two carriages overturned between the stations of Maragha and Tahta, it said in a statement.

Health Minister Hala Zayed travelled to Sohag to check on the injured, as authorities opened an investigation into the circumstances of the accident.

President Sisi vowed “deterrent punishment” for anyone found responsible for the collision.

“Anyone who caused this painful accident through negligence or corruption, or anything similar, must receive a deterrent punishment without exception or delay,” he said in a tweet.

Egypt has been plagued with deadly train accidents in recent years that have been widely blamed on inadequate infrastructure and poor maintenance.

One of the deadliest occurred in 2002 when 373 people died as a fire ripped through a crowded train south of Cairo, and there have been many fatal crashes since.