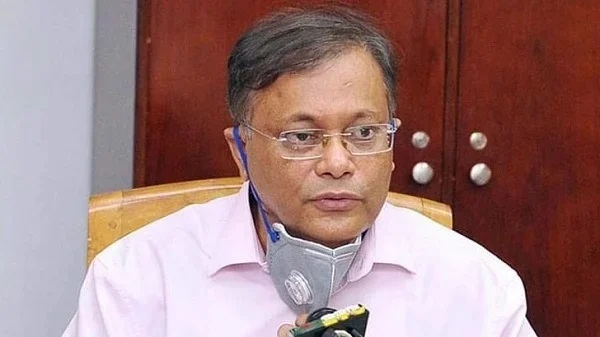 Information and Broadcasting Minister Dr Hasan Mahmud has said BNP is instigating those who are against Indian Prime Minister Narendra Modi’s visit to Bangladesh.

“BNP has been pursuing the politics of anti-India for long . . . It is not supportive for the development and progress of Bangladesh,” he said, addressing the triennial conference of Sapahar upazila Awami League of Naogaon district through video conference from his official residence in the capital on Wednesday, reports BSS.

Hasan said BNP secretary general Mirza Fakhrul Islam Alamgir has raised a question – ‘Why the Indian premier is coming to Bangladesh?’ In fact, the BNP and Jamaat, especially BNP, have made their position clear by raising the question that they are instigating those who are against Indian Prime Minister Narendra Modi’s visit to Dhaka, he added.

He said BNP has raised the question as the party doesn’t want the development of Bangladesh.

“I would like to request BNP to comeback to proper politics instead of raising such questions. It is not favourable for the development and progress of the country,” he said.

Hasan said the nation is going to celebrate the golden jubilee of independence when the country got the final recommendation from the United Nations for transition to a developing nation from the least developed country (LDC) status.

He said Bangladesh is heading towards becoming a developed state by 2041 under the leadership of Bangabandhu’s daughter Sheikh Hasina.

The minister urged the leaders and activists of the AL to be more humble in their behavior so that the common people are not hurt.