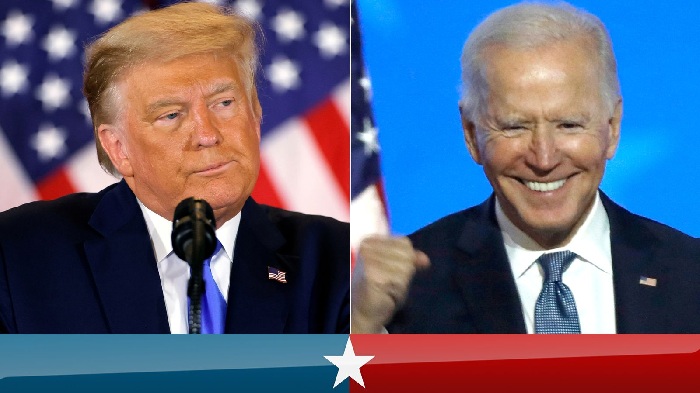 Democrat Joe Biden has moved closer to victory in the US presidential race as election officials tallied votes in the handful of states that will determine the outcome and protesters took to the streets, report agencies.

Republican President Donald Trump alleged fraud without providing evidence, filed lawsuits and called for recounts in a race yet to be decided.

With tensions rising, about 200 of Trump’s supporters, some armed with rifles and handguns, gathered outside an election office in Phoenix, Arizona, following unsubstantiated rumours that votes were not being counted.

According to Sky News, Joe Biden is closing in on Donald Trump in the key battleground of Georgia, hoping to flip a third state from the Republicans and put himself within touching distancing of the White House.

The Democrat challenger is now 18,000 votes behind–a much smaller gap than the 372,000 he trailed behind by 24 hours ago–as counting continues in a series of knife-edge elections.

But his fortunes have begun slipping away in Arizona – one of his highly-prized targets in the southern Sun Belt.

Only a handful of “toss up” states are left in play as he and Donald Trump vie for the crucial 270 Electoral College votes needed to win the US presidency.

So far, Mr Biden is the closest on 253 – also leading in the popular vote and breaking the record for the most number of votes ever cast for a presidential candidate.

Mr Trump has 214 Electoral College votes, also surpassing the number of total people who backed him in 2016 by more than three million.

In Detroit, officials blocked about 30 people, mostly Republicans, from entering a vote-counting facility amid unfounded claims that the vote count in Michigan was fraudulent.

Anti-Trump protesters in other cities demanded that vote counting continue. Police arrested 11 people and seized weapons in Portland, Oregon after reports of rioting, while arrests were also made in New York, Denver and Minneapolis.

The presidential race is coming down to close contests in five states. These are Georgia, North Carolina, Pennsylvania, Arizona, Nevada and Alaska.

Biden holds narrow leads in Nevada and Arizona while Mr Trump is watching his slim advantage fade in must-win states Pennsylvania and Georgia as postal and absentee votes are being counted.

The president is holding on to a narrow lead in North Carolina as well, another must-win for him.

Mr Trump has to win the states where he is still ahead plus either Arizona or Nevada to triumph and avoid becoming the first incumbent US president to lose a re-election bid since fellow Republican George HW Bush in 1992.

Edison Research gave Joe Biden a 243 to 213 lead over Donald Trump in Electoral College votes, which are largely based on a state’s population.

Other media networks said Mr Biden had won Wisconsin, which would give him another 10 votes. To win, a candidate needs 270 votes.

Biden predicted victory last night and launched a website to begin the transition to a Democratic-controlled White House in January.

Mr Trump has long sought to undermine the credibility of the voting process if he lost. Since Tuesday’s Election Day, he has falsely declared victory, accused Democrats of trying to steal the election without evidence and vowed to fight states in court.