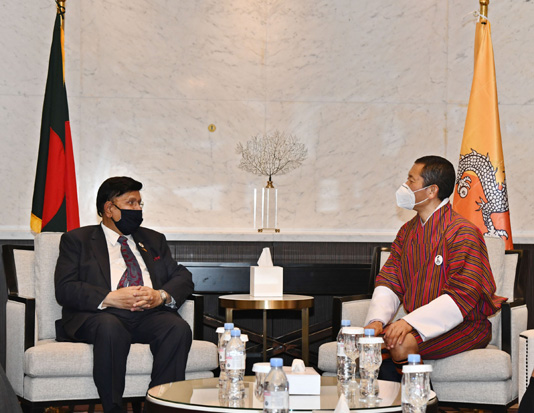 Foreign Minister Dr AK Abdul Momen on Tuesday said Bhutanese Prime Minister Dr Lotay Tshering came here just ‘purely’ join the Bangladesh’s ongoing celebration who has to take 21 a day-quarantine after going back to Thimbu.
“He will make the sacrifice of a 21-day quarantine only for showing respect to Bangabandhu … this is rare to get such friend like him … we are proud of (having friend like him),” he said after calling on Bhutanese prime minister at InterContinental Hotel in the afternoon.
Dr Lotay arrived today at a three-day official visit to join people of Bangladesh in the celebration of the birth centenary of Father of the Nation Bangabandhu Sheikh Mujibur Rahman and the golden jubilee of the independence of Bangladesh.
During the meeting, the foreign minister said, they talked about enhancing connectivity between Bangladesh and Bhutan through air and railway to reap economic benefits mutually.
Referring to Prime Minister Sheikh Hasina, the Foreign Minister said the entire region has a huge potential of development if connectivity and partnership are ensured among the South Asian nations.
The Bhutanese Prime Minister considers Bangladesh as his second home where he embraced his dream of becoming a doctor and learned the traits of saving lives.
On Wednesday, Lotay Tshering is scheduled to meet Prime Minister Sheikh Hasina at the Prime Minister’s Office (PMO) and it will be by bilateral talks.
The Bhutanese Prime minister will pay a courtesy call on President Abdul Hamid at Bangabhaban.
Later, in the afternoon, Lotay Tshering will join the celebration at National Parade Square as the guest of honoor. Prime Minister Sheikh Hasina will receive him there.
84
Share

US continues to work closely with Bangladesh against Covid-19: Miller