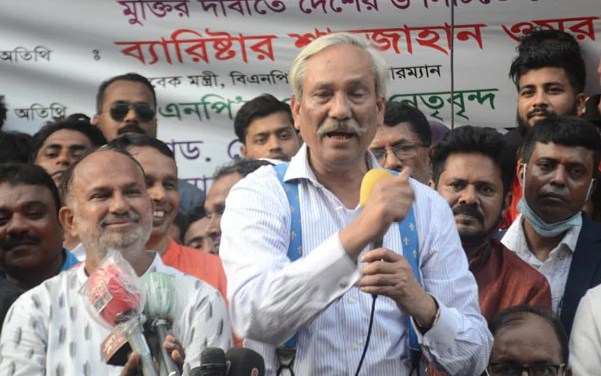 BNP leaders at a rally in Khulna on Saturday alleged that the government has turned Bangladesh into a ‘police state’ by ‘annihilating people’s voting rights only to continue its ‘fascist rule’.
They also said there is no alternative to forging a strong unity of people to restore people’s rights and ensure fair election by ‘ousting’ the current government through a movement.

“The current government is fascist and undemocratic one. It has turned the country into a police state by snatching democracy and all the rights of people,” said BNP vice-chairman Barrister Shahjahan Omar.

Khulna city unit BNP arranged the rally at Shaheed Moharaj Chattar in city demanding fair and credible elections under a neutral government and an Election Commission.

Shahjahan Omar said the government has continued its repressive acts against BNP leaders and activists to cling to power by suppressing them. “Awami League fears BNP as it has been in power illegally without people’s votes.”

He said the government has tried to foil their rally by creating various obstructions. “Our leaders and activists have been obstructed from joining the rally while vehicle movement has been stopped in a planned way.”

Referring to the death of writer Mushtaq Ahmed in jail, the BNP leader said the government is trying to eliminate its opponents and dissent resorting to repression. “People have now no scope to express their opinions freely.”

He called upon the people of all walks of life to get united and raise their voice for the restoration of democracy and their all rights, including the voting one.

Shahjahan Omar criticised the government for what he said its efforts to remove Ziaur Raman’s gallantry title Bir Uttam out of political vengeance.

He said their party will continue its movement for the restoration of democracy and voting rights. “We’ll come up with fresh action programmes after holding our scheduled rallies in six cities.”

Speaking at the programme, BNP vice-chairman Shamsuzzaman Dudu said people have got fed up with the current government as the ruling party leaders are indulging in widespread corruption, plundering and various misdeeds. ”Bangladesh has now become a mafia sate. People want to get rid of the autocratic rule of the current regime.”

He said there is no alternative to a strong movement to establish a pro-people government through a fair and credible election.

BNP organising secretary and Khulna city unit BNP president Nazrul Islam Manju said it is not possible to hold a fair election under the current government and the Election Commission.

He said a national election must be held under a non-party government and neutral election. “If necessary the next election can be held under the United Nations to ensure the voting rights of people.”