Ajay Devgn has a sweet birthday wish for SS Rajamouli

SS Rajamouli has turned a year older today. Since morning, fans have been flooding Twitter with birthday wishes for the Telugu director. And, one of the first celebs to wish him is Ajay Devgn. Taking to Twitter, the Singham actor wrote a sweet birthday wish for the director, with whom he is working in the film RRR.

In his tweet, he mentioned how it has been an honour for him to work with SS Rajamouli and also posted a happy photo with him. He wrote, “Many happy returns of the day dear Rajamouli Garu. It’s been an honour knowing you and working with you on RRR. Best wishes for always Sir Smiling face with smiling eyes @ssrajamouli”

This will be Ajay’s first collaboration with the director, who is known for his last magnum opus Baahubali 2. RRR is set to be his next big-budget film which will be a fiction take on the story of two freedom fighters Alluri Sitarama Raju and Komaram Bheem who fought against the British Raj and Nizam of Hyderabad respectively. 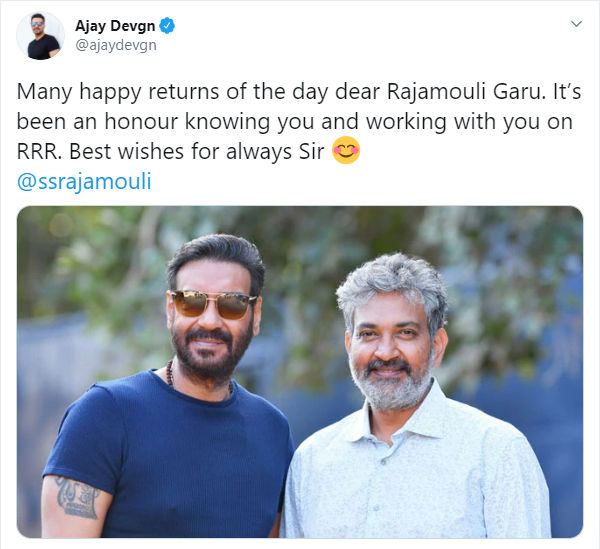 Besides Ajay, who will make his Telugu debut with the film, RRR stars Jr NTR and Ram Charan as the lead characters. It will also feature Alia Bhatt and Shriya Saran. However, the actress hasn’t started shooting for the film. Recently, the team resumed shooting in Hyderabad and Ram Charan released a BTS video of the film, further sharing that the first teaser will be out on October 22.

R
Rs 180 crore! Ajay Devgn’s first film with Aditya Chopra to be mounted on this amount?

Besides the Baahubali series, SS Rajamouli’s best works have been Jr NTR-starrer Student No.1, Nithiin’s Sye, Ravi Teja’s Vikramarkudu, Ram Charan’s Magadheera and Eega among others.

World Egg Day: How many eggs should you eat in a day to lose weight?