The makers of ‘Manikarnika: The Queen of Jhansi’ are leaving no stone unturned in creating the right kind of buzz for the film. Slated to release on January 25 next year, the film is based on the valiant Rani Laxmibai and is expected to have some mind-blowing action sequences performed by the ‘Queen’ of Bollywood.

The trailer of Manikarnika will be out at 2 pm today. Ahead of the trailer release, makers dropped a new poster that features Kangana in a regal avatar. 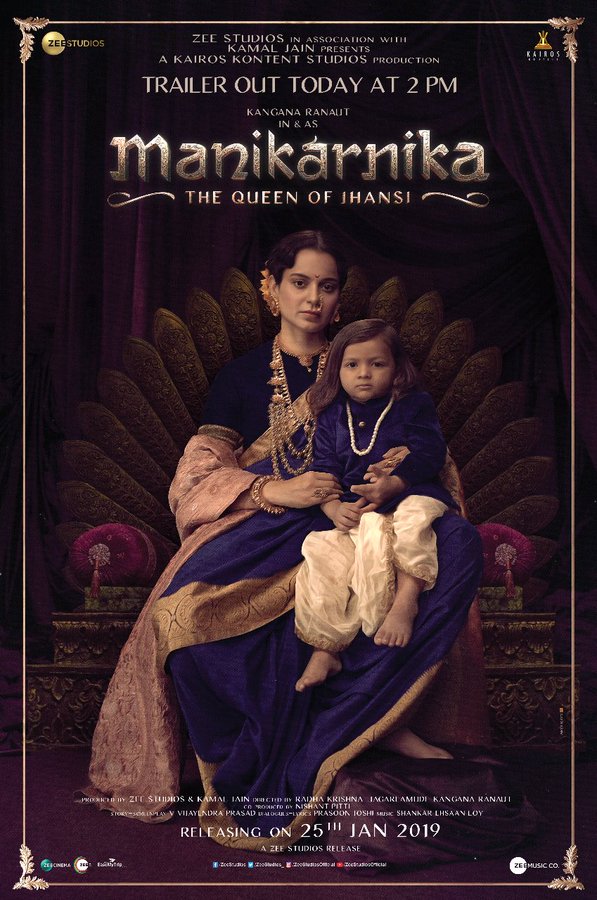 195 people are talking about this
The film is directed by Krish and produced by Zee Studios in association with Kamal Jain and Nishant Pitti. It also features Jisshu Sengupta, Atul Kulkarni, Sonu Sood and Suresh Oberoi in pivotal parts.

The makers of ‘Manikarnika: The Queen of Jhansi’ unveiled the film’s first look poster on the occasion of Independence Day this year. The poster featured Kangana Ranaut as the fierce and feisty Rani Laxmibai and the actress looked simply mind-blowing. The teaser of the film released on October 2 and raised the excitement around the film.

‘Manikarnika’ also marks popular television actress Ankita Lokhande’s debut in Bollywood. She plays Jhalkari Bai in the film and her look was revealed a couple of days back.

Ranbir Kapoor to play a ladies’ man, Shraddha Kapoor a waitress in Luv Ranjan’s next?

Urmila Matondkar ready to apologise to Kangana Ranaut; says, ‘I said rudali in…

Kriti Sanon pens thought-provoking note, writes ‘they fight for you,

Ranbir Kapoor to play a ladies’ man, Shraddha Kapoor a…

Antioxidants for immunity: Food rich in these healthy…

Water rises in Jamuna, sparks fear of another flood among…

Disagreement over namaj-e-janaza of Allama Shafi

UK sitting on top of 2.5 billion GBP to lend B’desh

ADB vows to work with Asia for recovery from COVID-19