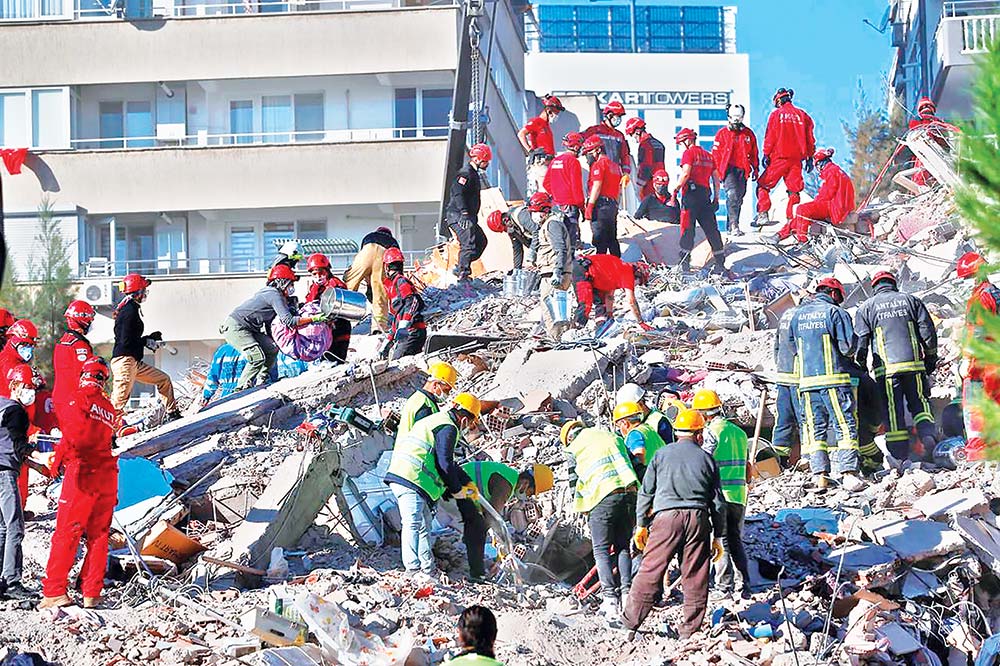 Rescue workers extricated a 70-year-old man from a collapsed building in western Turkey on Sunday, some 34 hours after a strong earthquake in the Aegean Sea struck Turkey and Greece, killing at least 60 people and injuring more than 900.
It was the latest series of remarkable rescues after the Friday afternoon earthquake, which was centered in the Aegean northeast of the Greek island of Samos. Search-and-rescue teams were working in nine toppled or damaged buildings in Izmir, Turkey’s third-largest city, but appeared to be finding more bodies Sunday than survivors.
Turkey’s President Recep Tayyip Erdogan raised the death toll Sunday in Izmir to 58. Two teenagers were killed Friday on Samos and at least 19 others were injured.
There was some debate over the magnitude of the earthquake. The U.S. Geological Survey rated it 7.0, while the Istanbul’s Kandilli Institute put it at 6.9 and Turkey’s Disaster and Emergency Management Presidency (AFAD) said it measured 6.6.
Ahmet Citim, 70, was pulled out of the rubble in the middle of the night and was hospitalized. Health Minister Fahrettin Koca tweeted that Citim said: “I never lost hope.” The minister visited the survivor and said he was doing well.
The quake triggered a small tsunami that hit Samos and the Seferihisar district of Izmir, drowning one elderly woman. The tremors were felt across western Turkey, including in Istanbul, as well as in the Greek capital of Athens. Hundreds of aftershocks followed. Turkey’s disaster agency said 920 people were injured in Turkey alone.
Turkish Vice President Fuat Oktay said 26 badly damaged buildings would be demolished.
“It’s not the earthquake that kills but buildings,” he added, repeating a common slogan.
76
Share

Low over central Bay, Signal No. 3 for maritime ports