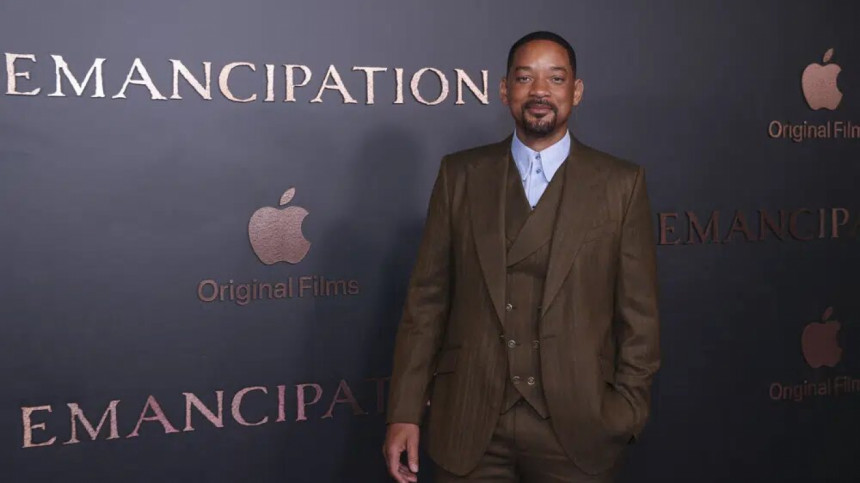 While filming “Emancipation,” Will Smith routinely drew inspiration from the words “sacred motivation” that were written on the front page of a script. But the Oscar winner heavily leaned on the phrase even more in recent months, as he tried to overcome the backlash to his Oscars slap and banishment from the ceremony.

“It’s like when you can locate and center yourself in your divine purpose, you can withstand anything and everything,” Smith said of the phrase that greeted him when he took on the lead role in Antoine Fuqua’s “Emancipation,” which is currently in theaters and will be available to stream Friday on Apple TV+. “Sacred motivation” became like a theme for him and his castmates, Smith said.

The film, completed months before Smith strode onto the Oscars stage and slapped presenter Chris Rock for a joke about Smith’s wife, Jada Pinkett-Smith, was a grueling shoot. Inspired by an iconic 1863 photo of the scarred back of “Whipped Peter,” Smith portrays the character Peter — a man who attempts to escape slavery while he uses his wits to dodge slave hunters and brave alligator-infested Louisiana swamps in his quest for freedom.

The photos of “Whipped Peter” were taken during a Union Army medical examination that first appeared in Harper’s Weekly. An image known as “The Scourged Back” showed countless mutilated whip marks on Peter’s bare back that were delivered by his enslavers. The photo contributed to the growing opposition to slavery.

A scene of Will Smith in Emancipation

Smith said his character taught him a lesson in overcoming adversity after he faced condemnation, memes and a 10-year Oscars attendance ban. The “slap” seemingly overshadowed his own biggest career milestone, which came later in the night: winning his first-ever Academy Award, best actor for “King Richard.”

The backlash rocked Smith, but Peter ultimately helped steer him back on track too.

“Peter has absolutely helped me through these last few months, just reestablishing within myself in what my purpose is in this world,” Smith said in a recent interview, one of his first since the Oscars. He has repeatedly apologized for his behavior after accepting his ban.

Normally, “Emancipation” might earn Smith some serious Oscars buzz. He’s still eligible for nominations and awards, but can’t personally accept them. Given backlash to “The Slap,” Smith mainly hopes that audiences will still watch Fuqua’s film.

“This movie was so grueling. Literally across the board, everybody had to devote a hefty amount of suffering to what you see on that screen,” Smith said. “So my greatest wish, and I guess I can talk about my greatest fear, is that my team would be penalized for my actions. I’m out with this film that I love and strictly want my people to get their flowers.”

Fuqua knows Smith made a mistake, but he hopes audiences can move past it. The director believes the story about Peter’s search for freedom, fighting to get back to his family and being a catalyst in highlighting the horrific side of slavery in “Emancipation” is much bigger than “The Slap.”