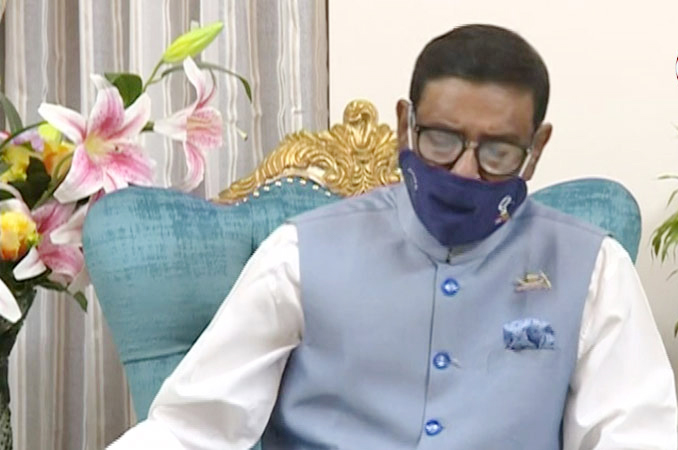 Awami League General Secretary Obaidul Quader on Monday said Prime Minister Sheikh Hasina’s speech has uncovered the faces of religious traders.
“The statement of Prime Minister Sheikh Hasina has unmasked the faces of religious traders. Her remark on the moral degradation of a Hefazat leader is factual and true,” he told a press conference on contemporary issues at his official residence here.
Quader, also road transport and bridges minister, said people thought that the so-called leaders would apologise in public after this shameful incident, but they did not do so.
He said Bangladesh is a land of Pir-Auliya and Ulama Keram, while the Islam loving people will not give chance to turn the religion into a tool for practicing unrighteousness things here.
The AL general secretary said after an immoral incident at a Sonargaon resort, the phone conversation of one of the Hefazat leaders went viral on social media, and identifying a beautiful woman as his second wife is no longer a secret matter now.
He said the vandalism, attacks and arson attacks being carried out at different parts of the country supporting such an immoral incident revealed the nature of extremists and communal forces.
These communal forces are a threat to the country’s independence and sovereignty and they want to take revenge for their past defeats by targeting the spirit of the liberation war, Quader said.
He urged all the patriotic people to get united aiming to resist the evil forces together.
The AL general secretary mentioned that after conducing proves into the vandalisms carried out on the occasion of the country’s golden jubilee, the government has started taking legal action against the people involved in the destructive acts.
The people of the country are with the Sheikh Hasina’s government, so the faces of those, who are inciting and financing the extremist communal forces, will also be exposed, he added.
About the COVID-19 situation, Quader said as both the coronavirus infection and death rate have increased in the country, the government is enforcing a seven-day lockdown.
He urged the country’s people to follow the 18-point directives of the government and health guidelines to help the government address coronavirus pandemic.
76
Share