The Indian entertainment fraternity is making sure that we don’t compromise on our daily dose of entertainment. With slated flicks not finding theatrical release, many makers have resorted to OTT platforms. One such awaited movie that will find it’s presence in the pool on content available of  Amazon Prime is Telugu-language flick Nishabdham helmed by Hemant Madhukar.

Ever since the first announcement, the movie has been able to create considerable hub-hub amongst moviegoers. This is mainly because it features Michael Madsen who is all buckled up to star in his first Indian movie. Apart from him, the cast of the movie includes prominent names like Anushka Shetty, R Madhavan, Anjali, Shalini Pandey, Subbaraju and Srinivas Avasarala in important roles. The movie shall be made available in Telugu, Tamil and Malayalam for film audiences across 200 countries and territories. 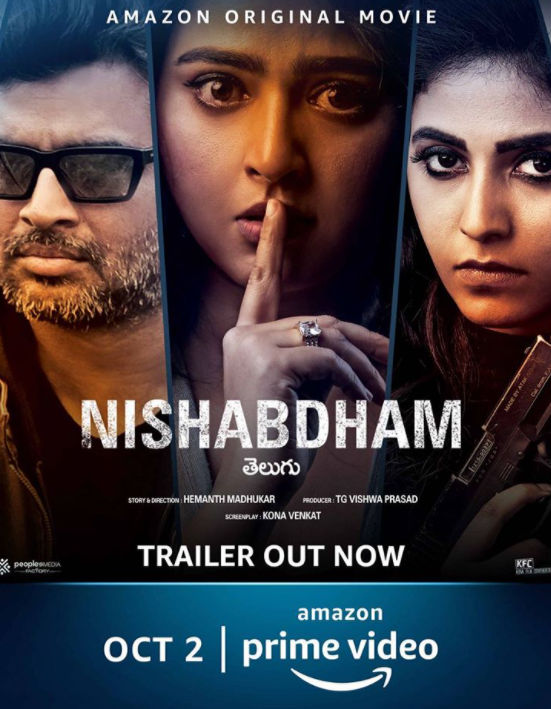 The trailer, on the other hand, features Anushka Shetty and R Madhavan in an intense avatar that keeps eyes hooked to the screen. Michael Madsen’s policing character will definitely add weightage to the film.

In the movie, Anushka Shetty will be seen playing the role of a dumb person. Nishabdham was meant for theatrical release on 31 January 2020 but was pushed to 02 April 2020. But with the COVID-19 condition in hand, the makers had to delay it further.

Taking to Twitter, the writer for this mystery drama Kona Venkat had shared that releasing the movie in theatres is their top priority. This tweet dates back to May 22, 2020. With the COVID-19 condition in hand, Nishabdham, like many popular flicks will stream on Amazon Prime on 02 October 2020.

Last year, the makers had released the song ‘Ninne Ninne’ in Telugu and ‘Neeye Neeye’ in Tamil from the movie’s official musical album.