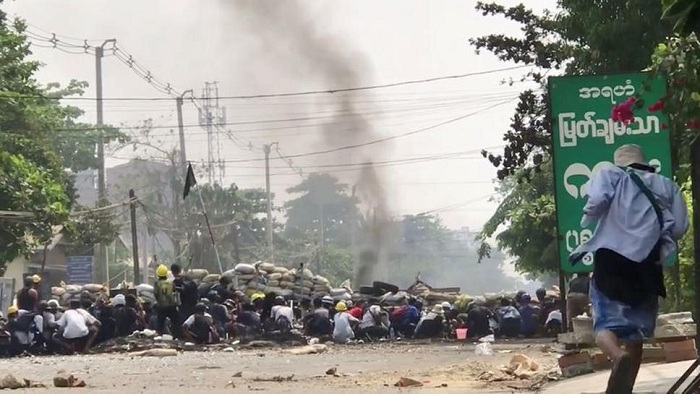 Myanmar’s security forces have killed at least 510 civilians in nearly two months of efforts to stop protests against a Feb. 1 coup, an advocacy group said on Monday, as thousands of people took to the streets again despite the growing toll.
Another 14 civilians were killed on Monday, the Assistance Association for Political Prisoners (AAPP) said, as it also updated figures for previous days. The total killed on Saturday, the bloodiest day so far, had risen to 141, figures showed.

The White House condemned the killings of civilians as an “abhorrent” use of lethal force and renewed a call for the restoration of democracy, while UN Secretary-General Antonio Guterres urged Myanmar’s generals to stop the killings and repression of demonstrations.

Security forces there fired a much heavier-calibre weapon than usual to clear a barricade of sand bags, witnesses said and a video clip showed. It was not immediately clear what type, although a community group posted a picture of a soldier with a grenade launcher.

State television said security forces used “riot weapons” to disperse a crowd of “violent terrorist people” who were destroying a pavement and one man was wounded.

Police and a junta spokesman did not answer calls seeking comment.

Despite the violence, crowds turned out in towns across the country, according to media and social media posts.

One of the main groups behind the protests, the General Strike Committee of Nationalities, called in an open letter on Facebook for ethnic minority forces to help those standing up to the “unfair oppression” of the military.
117
Share