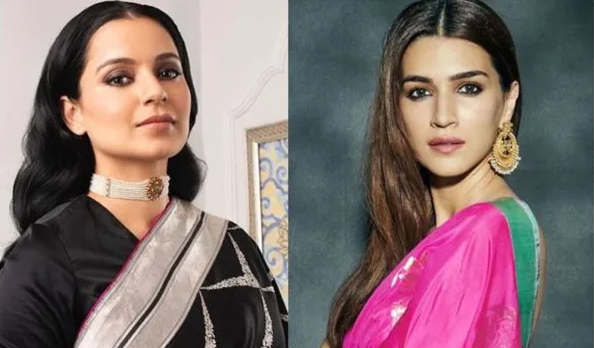 Kriti Sanon angrily reacts to the media chaos around Kangana Ranaut in the aircraft: How is this even allowed?

Kangana Ranaut traveled from Chandigarh to Mumbai on September 9 after her social media row with Shiv Sena party over calling Mumbai POK. Kriti Sanon is appalled looking at the media chaos on her aircraft.

Kriti reacts to media chaos around Kangana in the flight  |  Photo Credit: Instagram

Kangana Ranaut’s arrival in Mumbai on September 9 was certainly not a pleasent one. She landed in the city to find her office being demolished by BMC. The action was taken right after Kangana’s social media row with Shiv Sena leader Sanjay Raut.  However, BMC claims that they demolished her property over ‘illegal construction’ and not as a retaliation to her POK remark on Mumbai. Kangana was also threatened to leave the city and there was an all new protest against the actress.

At a time like this, the media reporters didn’t think twice before chasing Kangana from airport to aircraft, to capture minute-by-minute details of her whereabouts. And they ended up violating social-distancing norms.

Just like how many celebs had called out the media mob around Rhea Chakraborty on her first day interrogation at NCB, a section of the society is now calling out the media chaos around Kangana on the aircraft. Kriti Sanon took to Twitter to share a video of the reporters hounding all over Kangana’s seat, even when she’s refusing to answer.

Kriti Sanon is appalled looking at the way people have forgotten that our country is still in a middle of a pandemic. “This is what i meant.. how is this even allowed? Have we forgotten that we are still in the middle of a serious pandemic and the number of cases are just rising? We haven’t even reached a peak yet!”

Directorate General of Civil Aviation has sought a report from IndiGo airlines on photography and videography during Kangana’s .