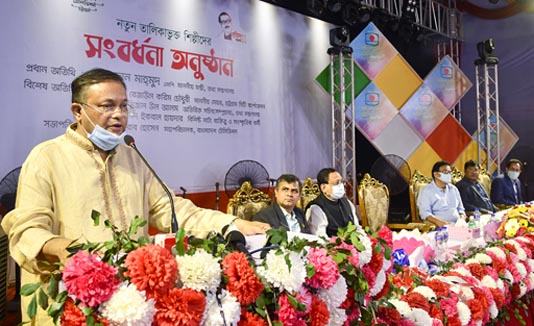 Information Minister and Joint Secretary of Bangladesh Awami League (AL) Dr Hasan Mahmud on Friday raised question over Begum Zia and her party’s foreign love.
The word of Begum Zia’s physical illness is a problem that is very old, he said, adding that Khaleda was suffering from leg and waist pains as well are also old.
“But the BNP leaders are now pretending to say that her leg and waist pain is a new problem. Whereas Khaleda Zia performed her duty as prime minister twice and leader of the opposition earlier bearing with the pain in her leg and waist which did not obstruct her,” Hasan said.
“It is not wise to show the problem again and again. He said Begum Khaleda Zia is a convicted accused, she was not acquitted by the court, nor did she get bail from the court” he added.
As family members of Begum Khaleda Zia made an appeal for extension of suspended prison, the prime minister took steps to extend suspension of the prison of Khaleda for another six months on humanitarian grounds, the minister said.
Dr Hasan said that prime minister was very kind and extended the suspension of prison with administrative powers for six months.
“Which has been extended once, they have applied for one more and it is under process. Why should she be taken abroad? The government ensured the ex-premier’s best possible treatment despite her imprisonment on graft charges,” he added.
The Information Minister was addressing a reception accorded to the newly listed artistes of Bangladesh Television Chattogram Center on Friday (March 12) evening.
Director General of BTV Shohrab Hossain presided over the function, while City Mayor M Reazaul Karim Chowdhury, Md Mizanul Alam, additional secretary (Transmission) of the information ministry, Ahmed Iqbal Haider, Drama Personality and Cultural activist Ahmed Iqbal Haider, among others, addressed the function as special guests.
Netai Kumar Bhattacharya, General Manager of BTV Chattogram, gave the welcome speech.
Replying to a question on BNP Secretary General Mirza Fakhrul Islam Alamgir’s statement that Begum Khaleda Zia has been kept under house arrest, she is not being treated and she is not being allowed to be taken aboard, Dr Hasan alleged that BNP continued to put its efforts to use Khaleda’s health issue for its political purpose with an evil intension.
He said that BNP secretary general Mirza Fakhrul should have thanked Prime Minister Sheikh Hasina for allowing Begum Khaleda Zia to stay at home despite her conditional bail from the court.
77
Share