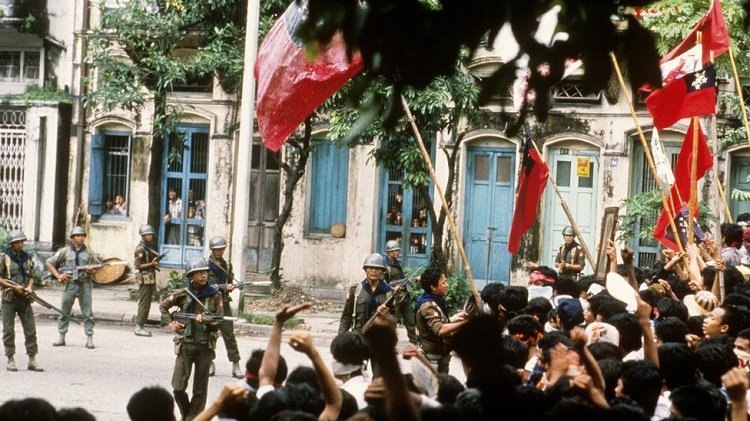 Student activists lead a movement to bring an end to a widely-hated military government in Myanmar. It grows into a nationwide uprising, a general strike, which is met with savage brutality by the armed forces. 2021? Or 1988?
The 1988 uprising remains one of the defining moments of Myanmar’s modern history. A regime which had used extreme levels of violence to hold onto power, suddenly found itself facing massive protests over its calamitous mishandling of the economy.

By 1988 Burma, as the South East Asian nation was then known, had been ruled for 26 years by the secretive and superstitious General Ne Win, who seized power in a coup in 1962. He was commander of the armed forces – known as the Tatmadaw – which had been fighting insurgencies in several parts of Burma since independence in 1948, and viewed civilians as incapable of holding the country together.

General Ne Win cut Burma off from the outside world, refusing to take sides in the Cold War divisions then afflicting Asia. Instead he implemented an eccentric one-party system under his Burma Socialist Programme Party, in which the army played a dominant role, and led to Burma becoming one of the world’s poorest countries.

The political drama which culminated in the mass rallies of August and September 1988 actually began one year earlier, with Ne Win’s sudden decision to demonetise all existing banknotes. This had a catastrophic economic impact, in particular on students who had saved up their tuition fees.

‘The 88 generation’
The confrontations with the military government escalated from that point, with soldiers using increasing levels of lethal force, to the point where they killed thousands in late 1988. The violence used against unarmed civilians since last month’s coup has been shocking, but it’s not at that level – yet.

To this day the so-called “88 Generation” of students, who led that uprising, have a special status in Myanmar. Many of them spent up to two decades in prison, where deprivation and ill-treatment robbed them of their health, but not their fighting spirit. Some have even been out in today’s protests.

But they are no longer young – the best known 88 Generation leader Min Ko Naing is 58 years old – and the protest environment has been dramatically transformed by technology, allowing every confrontation to be filmed and uploaded immediately, and many of the abuses by the security forces to be recorded.

Social media v pamphlets
So today, people even in the farthest-flung parts of Myanmar are instantly aware of what’s happening anywhere in the country as news of protests and crackdowns appear on Facebook and Twitter there almost as quickly as those in the big cities.

Back in 1988 however, the students relied on crudely-printed pamphlets and word of mouth to communicate; Burma had very limited access to television or even old-fashioned telephone landlines. The scratchy, short-wave broadcasts of BBC World Service were a lifeline, both for Burmese and English speakers.

Christopher Gunness, the young BBC reporter who was one of the few foreigners who managed to report from there for a short time during the tumultuous events of August, became a folk hero, as his broadcasts helped spread the word about the general strike called for 8.8.88 – where hundreds of thousands came out to protest before a bloody crackdown.

And it was the 26 years of economic isolation and wretched poverty which motivated protesters in 1988, not a sudden power grab after 10 years of democratic rule, as now. In 2021 those leading the protests want to preserve economic possibilities and access to the world that, in the past decade, have been far in excess of what their parents had.